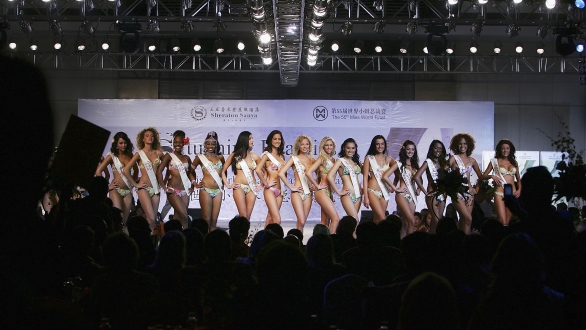 The Miss World Organisation has announced that never again will contestants compete in a bikini portion of the competition.

Instead — beachwear will be worn, which the organization feels is more in line with its ‘beauty with a purpose’ mission.

The ‘beauty with a purpose’ mission involves charity work and has been around since 1979. The bikini portion of the competition had been around longer — for 63 years.

ABC News spoke with Chris Wilmer, the national director of Miss World America, about this change.

"It's not just a beauty contest, it's 'beauty with a purpose'. There didn't seem to be a purpose to have the swimsuit."

The idea here seems to be that Miss World is supposed to be an ambassador who helps communities, not just a beauty queen.

The bikini portion of the competition has actually been conducted offstage since 2001, but it’s still been heavily criticized. This move is receiving some literal applause.

But, some still view it as not enough. Emily Sawyer of the London Feminist Network told the Telegraph:

“The whole competition is sexist - swimsuits or no swimsuits. Women can be objectified whether they're in swimsuits or dresses.”

This video includes an image from Getty Images / Cancan Chu.