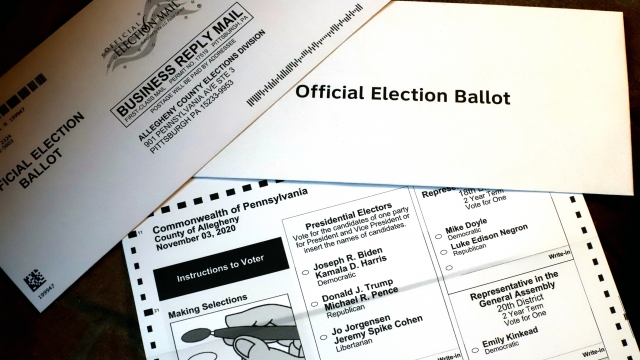 The Trump campaign suit in Pennsylvania focuses on mail-in and absentee ballots. One central issue is ballot curing.

"We're talking about the ability of a voter to fix their mistakes," said Interim Executive Director of Common Cause Philadelphia, Suzanne Almeida. Common Cause has partnered with several other groups including the NAACP and League of Women Voters to challenge the suit. "Some counties were proactively reaching out to voters," she explained, "Some counties didn't."

There were two common mistakes. One, an error on the outer envelope - a missing signature, misspelling, or incorrect address. And two, a missing secrecy sleeve (an envelope containing your ballot placed inside the envelope used for mailing).  Any of these mistakes disqualifies a ballot.

In a press conference on Thursday, Trump campaign attorney Rudy Giuliani said, "If you made a mistake in that ballot and you lived in Philadelphia or Pittsburgh,  you were allowed to fix that mistake. But if you lived in what would be considered the Republican or Trump parts of the state, you were given no such right."

But we found that wasn't exactly the case. We reached out to every county’s elections office - and have so far confirmed only two counties - Somerset and Mercer - did not allow any kind of ballot curing.

The lawsuit states that “Lancaster, York, Westmoreland and Berks counties... did not contact voters who submitted defective ballots or give them an opportunity to cure.” But a Berks County spokesperson said voters who suspected a mistake "were given the opportunity to come into the office to 'cure' their ballot."

And a representative from York County said in some cases they passed voter names onto poll watchers to reach out.

A spokesperson from Fayette County - home to one of the two voters at the center of the complaint - wrote, "The county sent letters to those constituents whose mail-in or absentee ballots were identified as having one or more issues with their voter declaration on the external mailing envelope."

Westmoreland elections officials did not respond to repeated inquiries and the Lancaster elections director said: “No comment due to it being the subject of pending litigation.”

Commissioner Joe Kantz of Republican-leaning Snyder County said they let voters fix missing signatures. "We would do our best to contact that voter - let them know that it was not signed. If they wanted to come into the courthouse and sign it, they could do that, make sure their vote counted."

One defendant - Delaware County, was even more reserved - only notifying the parties if there was a mistake. They could then reach out to the voter.

Another, Allegheny, automatically returned mail-in ballots with mistakes on the outer envelope including directions on how to cure - but did not notify voters of a missing secrecy sleeve.

But these discrepancies do not necessarily point to anything nefarious. In Pennsylvania, like the rest of the country, elections are run at the county level. As Almeida explained, "There is wide variation and how counties choose to do a lot of the pieces of election administration."