Lawmakers Call On Treasury To Mint Trillion-Dollar Coins For Stimulus 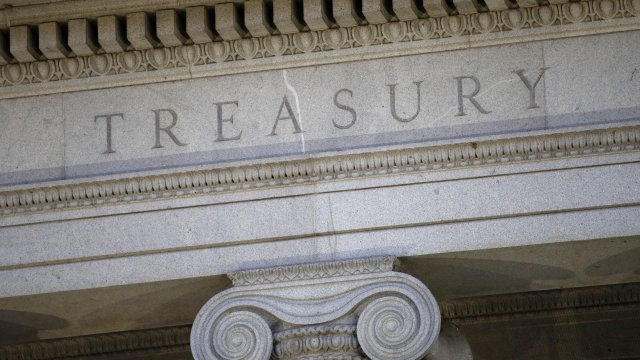 The federal debt is at a record high — nearly $25 trillion. And that number could jump, depending on how much economic relief is needed during the COVID-19 pandemic.

But two members of Congress say they have a way to provide financial aid to struggling Americans, without adding to the deficit.

“The concept is uniquely different, but we’re in a historical time in our country,” said U.S. Rep. Rashida Tlaib (D-MI).

“It’s going to allow us to do recurring payments in a much more aggressive and inclusive way,” Tlaib said.

The bill is based on the “Mint the Coin” theory. Here’s how it works: the Treasury would make the coins, each worth $1 trillion. Those coins would then be deposited at the Federal Reserve, which by law would be required to recognize them as legal tender. The Fed would add $2 trillion to the Treasury's account to spend on relief.  Proponents say an ambiguous federal statute makes it perfectly legal.

“In principle, the Treasury Secretary could mint platinum coins of any size, up to a trillion dollars,” said Donald Marron, director of economic policy initiatives at the Urban Institute.

The concept was last widely discussed in 2012 during debates over the debt ceiling. By 2013, it was eventually rejected. It may be gaining some momentum in the coronavirus economy, but it still has plenty of critics — one of the chief complaints among them being that it isn’t practical.

“It’s clearly making use of a loophole, thinking about the idea of a commemorative coin, exploding it up to a trillion dollars, and using that as a mechanism. But I think it strikes people as sounding weird because it does sound weird,” Marron said.

But Tlaib and her colleagues in the House remain undeterred, comparing pushback to the coin idea to initial resistance to programs like Social Security or universal health care.

“It is a tool that is available to us. Why not use it?” Tlaib said.

But given the current political climate, it’s unclear if support for the measure will look much different than it did during the fiscal cliff.