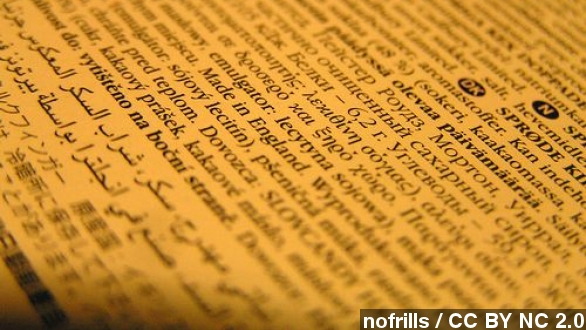 A new study published Wednesday found that up to 25 percent of the world's languages are endangered due to growing economies and globalization.

What do endangered species and minority languages have in common? Both face the possibility of going extinct.

And, for the latter, researchers found at least one reason why. In a study published Wednesday in the Proceedings of The Royal Society B, researchers from the University of Cambridge in England found that economic growth contributes to vanishing languages. Here's how they did it:

Dr. Tatsuya Amano is a zoologist — not a linguist — at Cambridge and the study's lead author. He and other researchers used criteria from an international conservation organization — typically used for endangered animals — to evaluate the extinction risk for the world's 7,000 human languages.

By examining "geographical range sizes, small speaker population sizes and rapid declines in speaker numbers" in 9 percent, or 649, of the world's languages, the researchers found that, "economic growth and globalization are primary drivers of recent language speaker declines (mainly since the 1970s onwards)."

Amano mentions Marie Smith Jones who died in 2008. She was the last native speaker of Eyak, an Alaskan language. (Video via YouTube / Eyak Language ~ dAXunhyuuga')

And it's not hard to find other languages that could face the same fate. Using language reference resource Ethnologue, the researchers found languages with only a few living speakers. In fact, 25 percent of the world's languages are threatened.

Emily Underwood for Science Magazine explains this sort of research has actually been done before: "It’s well known that economic growth or the desire to achieve it can drive language loss. ... Dominant languages such as Mandarin Chinese and English are often required for upward mobility in education and business, and economic assistance often encourages recipients to speak dominant languages."

But Underwood says this new study differs in that it shows the decline of languages is a global phenomenon and not occurring on a case-by-case basis. So, why does the loss of languages even matter?

Well, when Marie Smith Jones died, a Guardian writer re-purposed a quote from late MIT linguist Kenneth Hale, who famously said losing a language is like bombing the Louvre.

Amano notes on his blog that the preservation of "human cultural diversities" is so important, organizations like the World Wide Fund for Nature and the United Nations have even jumped on board with saving them.

While this most recent study doesn't get into how to preserve endangered languages, Amano told LiveScience he hopes the results will help identify which languages are in trouble in the near future.