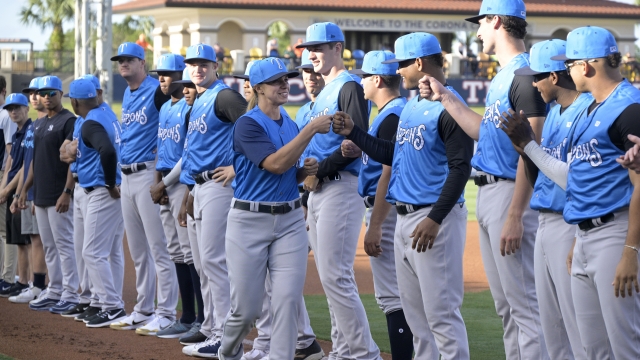 The World Series wrapped up earlier this month. Tens of thousands attended every game, and millions watched as the Houston Astros won baseball's championship against the Philadelphia Phillies.

Most of those players worked their way up through the minor leagues to land the multi-million dollar contracts they're signed with today. Until then though, minor league players in every sport, but especially baseball, make a lot less than that — sometimes even below the poverty line.

But, recent momentum for underpaid workers to unionize in coffee shops and warehouses might be turning the tide for minor league players — in baseball and beyond.

In recent decades, baseball's minor league system has lagged behind, even as other leagues have invested in paying minor league athletes more.

Players only get paid in-season, and it doesn't include things like the month-and-a-half-long spring training or off-season workouts.

"If you asked most people what the average salary is for a player of the Tampa Bay Rays, for example, they would probably come up with some number in the millions of dollars, but when you actually account for all the minor leaguers, the average salary is quite low," said Nola Agha, a professor of economics at the University of San Francisco. "The lowest you would be shocked to probably find out is about $4,000. That's at the rookie level; that's at the lowest level. Now, the triple-A player is closer to $12,000. It's exceedingly small when you see numbers like that."

"They have to live, they have to be able to afford decent housing so they can get decent sleep, so they can get nutritional supplements, so they can buy their own gear," Agha said. "They need playing opportunities, but the fourth most important need, they said, was nutritious food. So, here we are talking about potentially the next big superstar, the next big player in the world, and the fourth most important need that they have is literally just for nutrition."

Conner O'Neil saw some rough meals when he was a minor league player in both the New York Mets and Chicago White Sox. He made it to the High-A level — three stops away from the majors — in a career spanning five years.

"It was still powdered egg, oatmeal, mystery meat," O'Neil said. "It was not very palatable."

Owners and players have been deadlocked over a wide set of issues like TV money distribution, players' salaries and even game rules.

It's a long, winding road for any player to the big leagues.

A player's path first depends on whether they're from the U.S. or abroad. American players have no choice where they play at first. After high school or at least three years of college, they enter a draft and have to sign with the team that selects them. Players from abroad can choose their team, but they usually have to sign at age 16 to draw any interest from American teams.

Both domestic and international players get signing bonuses. Those can be big, but they're usually quite small, especially after taxes and agent fees are removed.

It can take players years to make it to the major leagues, but many never do.

If players want to try going pro, any contract they sign allows a team to do whatever they want with them for up to seven years. If the player doesn't like the conditions or their role, they can't move on their own to another team.

Teams are also free to pay players less than the minimum wage legally. Lobbying by baseball teams led to Congress passing the Save America's Pastime Act in 2018. It allowed MLB teams to exempt minor leaguers from minimum wage requirements.

Simon Rosenblum-Larson was a pitcher in the Tampa Bay Rays organization until earlier in 2022. He made it up to Double-A before getting released.

"Over the course of my minor league career, I never made more than about just over $10,000 in a season; that's before taxes," Rosenblum-Larson said. "There's no way to make a living playing minor league baseball. You are losing money every single year you play."

Both during and after his time playing, he got involved with More Than Baseball. Now as program director, he advocates for players to make more and live better than he and his teammates did.

Rosenblum-Larson's group estimates more than half of all minor leaguers take second jobs in the off-season.

"It was a lot of front desk at a gym, Lululemon, stuff like that where I could just do it part-time and just only making ends meet and in the off season just to allow yourself another opportunity to go play," O'Neil said.

Not everyone is guaranteed help. When O'Neil was released and signed on with the Chicago White Sox, he lost money playing for them.

"They flew me to Arizona, and I had to get my own rental car that they didn't pay for, had to get an Airbnb that they didn't help pay for," O'Neil said. "I got no reimbursement for it, so I lost a decent amount of money in my time with the White Sox. That was that was pretty painful."

How Pay Disparities In Women's Sports Pushes Them To Go International

Brittney Griner said she's exhausted from having to go overseas to play basketball.

But, things are changing. It took years of organizing, but near the end of this season, minor league baseball players quickly agreed to join the Major League Baseball Players Association, or MLBPA.

Garrett Broshuis, a former minor-leaguer-turned-lawyer and player labor advocate, sees a lot of the change in baseball tying back to changes both in other sports and in society.

Numbers bear that out. A Gallup poll from August found support for unions in the U.S. was at its highest level in 57 years, with more than seven in 10 Americans approving of unions.

These changes aren't unique to baseball. Players in minor leagues and even in less profitable major leagues have relied on unionization to push for better wages and living conditions. For example, soccer's second division USL Championship finalized a collective bargaining agreement before their 2022 season.

"We're only six months in at the championship level to having a CBA, but we've seen wage growth in the last six months of 30% across the board," Tobin said.

Players in the top U.S. women's soccer league, the NWSL, rolled out a promotional campaign featuring #NoMoreSideHustles as they negotiated a collective bargaining agreement.

"These players were making $22,000 a year, and you can't live on that — especially not in New York, Chicago, places like that," said Meghann Burke, executive director of the NWSL Players Association and former professional soccer player. "We did increase the minimum salary to 35 grand for players, guaranteed housing, access to some transportation support, pretty decent health insurance, and just some basic tools in the toolbox to help people to singularly focus on their game."

Although the players unions have different levels of experience negotiating, different considerations for players, different acceptable wages — all of them have reshaped life for top-level athletes knocking on the door of major league success.