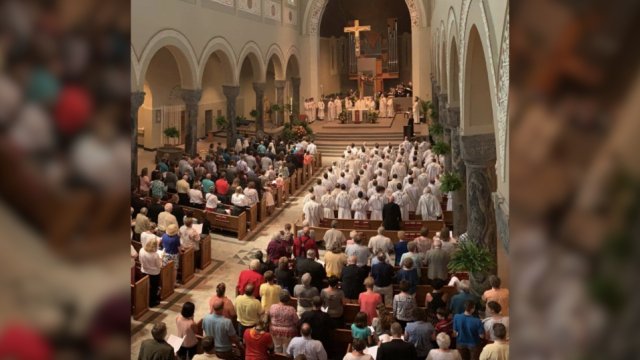 SMS
Minnesota Diocese Agrees To Pay Sexual Abuse Survivors $22.5M
By Johannah Grenaway
By Johannah Grenaway
May 28, 2020
Forty-one St. Cloud diocese priests have been credibly accused of sexually abusing some 70 people in cases dating back to the 1950s.
SHOW TRANSCRIPT

The Roman Catholic Diocese of Saint Cloud in Minnesota has agreed to pay sexual abuse survivors a total of $22.5 million in a trust.

The deal is subject to the diocese filing for Chapter 11 bankruptcy protections. St. Cloud also said it will release the names and any files related to all clergy members who have been "credibly accused of abuse."

According to The Associated Press, about 70 people have accused 41 St. Cloud priests of sexual abuse in cases dating as far back as the 1950s. Most of the accused have died, but The Star Tribune reports that there was one still in active ministry as recently as five years ago.

In a statement, St. Cloud Bishop Donald Kettler apologized to sexual abuse survivors "on behalf of the Church for the harm they suffered." He praised their courage for coming forward and said he remains "committed" to their healing. Kettler hopes the settlement "is another step in that direction."

Four of Minnesota's six dioceses have already filed for bankruptcy while settling sexual abuse allegations. St. Cloud is expected to request bankruptcy protections over the next few weeks.