Minneapolis Aims To Fix Its Housing Shortage Through Zoning Changes 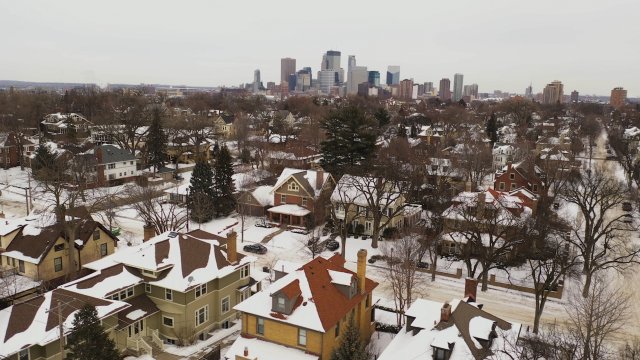 A brand new duplex represents everything Janne Flisrand has been fighting for: a multi-unit building in a part of town that for years only allowed single-family homes.

As the co-founder of "Neighbors for More Neighbors," Flisrand played a major role when her city eliminated single-family zoning in 2018 — a classification that has long been associated with segregation.

For decades, 70% of the city’s residential land was exclusively zoned for detached single-family homes.

Now, residential buildings with up to three units, like duplexes and triplexes, are allowed just about everywhere.

Minneapolis was the first major U.S. city to approve such a change and it was hailed nationally.

"This is looking at zoning with an equity lens rather than with an exclusionary intent," said Edward Goetz, director for the Center for Urban and Regional Affairs at the University of Minnesota.

But a few years in, not much has changed.

Though construction of duplexes and triplexes has increased since the zoning change, the overall numbers remain largely insignificant in a city of 430,000.

"You're talking about purchasing an existing home and then rehabbing it to make it into a duplex or a triplex, and the economics of that aren't such that a lot of activity is going to happen in a short period of time," Goetz said.

Despite its brutal winters, Minneapolis is a booming city. Its population grew by more than 12% in the last 10 years, but housing construction has not kept pace.

As a result, the Minneapolis metro area has the worst housing shortage in the nation, sending rents and housing costs soaring.

This means those making less money — a disproportionate number of them being black people — are increasingly getting priced out.

Tabitha Montgomery leads the Powderhorn Park Neighborhood Association — one of the most diverse areas in town.

But 16% of people there live below the poverty line, and 45% of the housing stock is occupied by renters as the rent in the community has consistently been rising.

The neighborhood includes the site where George Floyd was murdered by police in 2020.

"Nearly 50% of the community identifies as people of color," Montgomery said. "Our desire is to demonstrate that we're not going to forget and...that we should have a just and equitable system of practices for all people within the communities they live in."

Montgomery says the re-zoning and other changes the city is implementing are good steps, but not silver bullets.

“I don't believe that in and of themselves, they are trying to eradicate or reverse the centuries now of inequality as much as trying to be in the posture of being able to help, to accelerate, closing the disparities that exist and likely will continue to exist to some degree," Montgomery said.

The zoning change came as a part of Minneapolis 2040 — a sweeping plan to tackle issues like racial inequalities and climate change.

City officials tell Newsy there is a lot more in the plan to fix the housing shortage.

"Our strategy has also included, from a regulatory standpoint, allowing more missing middle housing that kind of four-units to 20-units range," said Jason Wittenberg, the manager of code development for the City of Minneapolis. "For larger scale projects, we have created a higher degree of clarity and predictability in our regulations," Wittenberg added.

As for Flisrand, she says her own living arrangement is the driving force behind her activism.

"This is my four-plex, and I've lived here since 1996 and I want to make sure that everybody has the opportunities I've had," Flisrand said.

She bought the building in the 90s and has been renting three of the four units to help pay for her mortgage.

"Living here taught me why it matters if it's legal to build duplexes, triplexes, fourplexes or not," Flisrand said.

Now she’s on a mission to educate others in a fun and accessible way about how zoning rules impact people’s lives.