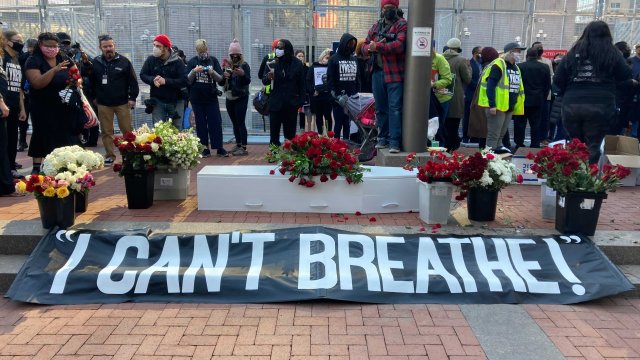 In preparation for the trial of Derek Chauvin, the city of Minneapolis and the surrounding county has spent upwards of $1 million on fencing, barricades and barbed wire.

"Some in our communities may find some of the environmental structures that they see — barricades and barriers and fences — perhaps a little bit daunting," Minneapolis Police Chief Medaria Arradondo said. "But, as we saw the events of Jan. 6, that is that preventative tool that we have to consider and have to look at."

But for some in Minneapolis, the fencing feels less like a precaution and more like an indictment of the city's residents.

"What do you think this says to the community more broadly?" Jamal Andress, Newsy Justice Reporter asked.

He has represented protesters in Minneapolis in the aftermath of controversial police killings.

"You had folks who are on the streets on principle," Gordon said. "You also had Black protesters who could easily put themselves in the shoes of a George Floyd or someone like Philando Castile or someone like Jamal Clarke. And for them, the act of protest was an act of processing...and not just process it, but to do so in a shared collective venue. Right? I'm not alone in feeling this grief. Here are all the people who may not know me who also share in that."

"The city would say, I would imagine, 'We lost a precinct. There were bad actors who came out every night and caused havoc. This is not for peaceful protesters.' What would be your response to that argument from the city?" Andress asked.

"You can protect property and property should be protected. This protects this property," Gordon said. "Let's say you want to ensure that people are coming out, and they're protesting and that process is meaningful, and it's peaceful. Then talk to the people who are going to protest. Find out why, for example, they may turn violent."

Gov. Tim Walz listed the total cost of damages from the unrest last summer at $500 million and believes nearly 1,500 businesses were impacted by looting, fire or vandalism.

Now, the city has six different law enforcement agencies all focused on this trial, including roughly 2,000 National Guard troops stationed in the city.

Despite the additional security, activists in Minneapolis have plans to protest throughout the trial. Gordon says George Floyd's death and Derek Chauvin's trial stands out amongst the police killings he's seen over the years.

"The video seemed to show an individual who just didn't care that George Floyd was a person. And the things you fall back on: the officer was scared for your safety, the officers were scared because a person had a gun or a knife, or they were rushing them or charging them. It just wasn't true here. And so because you couldn't fall back on a narrative, and you double down on the callousness. I think that's why you saw the response," Gordon said.