Millions Of Us Could Be Underwater If Sea Levels Keep Rising 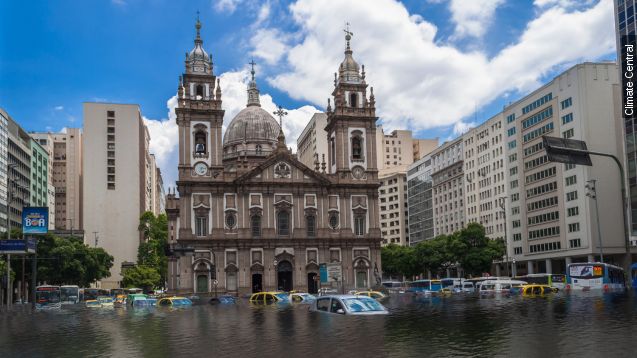 SMS
Millions Of Us Could Be Underwater If Sea Levels Keep Rising
By Katie Link
By Katie Link
November 9, 2015
A new report by Climate Central shares images edited to show what the world might look like if sea levels continue to rise.
SHOW TRANSCRIPT

The upcoming climate talks in Paris have generated a lot of buzz lately. This is largely because different organizations love to publish reports to update us on where we stand on saving the Earth. Hint: It's not looking good. (Video via NASA)

And a new report by Climate Central is sharing its global warming message in the form of edited images.

Here are the same projections for New York City ... after the Earth warms 2 degrees Celsius, we can still see that bull on Wall Street. Not the case after warming 4 degrees Celsius.

This is what Hong Kong would look like if global warming reaches 2 degrees Celsius. Lots of streets are underwater.

According to Climate Central, those images could soon be the reality. A different report released Monday by the U.K. Met Office agrees. It says 2015 is on track to be 1 degree Celsius hotter than ever before.

The study projects that a 2-degree Celsius increase in temperatures would put about 280 million people underwater. Yikes.

So what do we do to keep all of us on dry land? Yeah, that's what world leaders will be discussing in Paris next month.