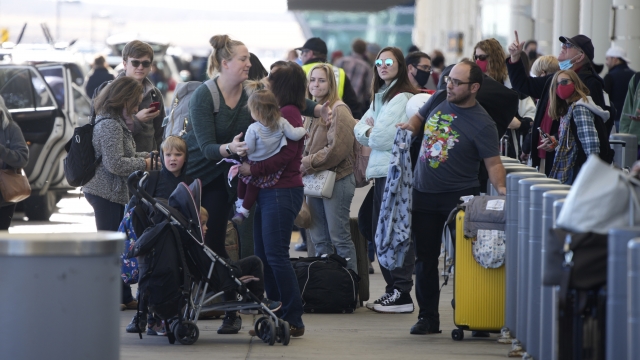 Millions of Americans are traveling back from the Christmas holiday. The past few days have already proven to be a handful.

Traveler Merridee Evans said, "the lines were insane. There's no other word for it. I've never seen it pretty much wrapped around the whole floor."

The TSA says more than 1.5 million people were screened at airport checkpoints on Christmas. That is up from last year, but still nowhere close to pre-pandemic levels.   AAA expects more than 109 million people will travel between December 23rd and January 2nd.

More than 700 flights were canceled Sunday, adding to the more than 6,000 canceled worldwide over the three-day holiday weekend. Health officials warn the COVID surge could get worse as a result of all the traveling over the holidays.  Omicron is spreading rapidly and has already spoiled holiday plans. Dr. Anthony Fauci said " the last weekly average was about 150,000 and that likely will go much higher."

Travel industry analyst Henry Harteveldt said "what I would say to folks who are planning to travel in the next few days is to be flexible...there is a likelihood your flight may be delayed or canceled as airlines are navigating their way through this unusual period."

If you're flying arrive early, bring a mask, be ready to strap in and watch out for any signs of COVID in the days ahead.