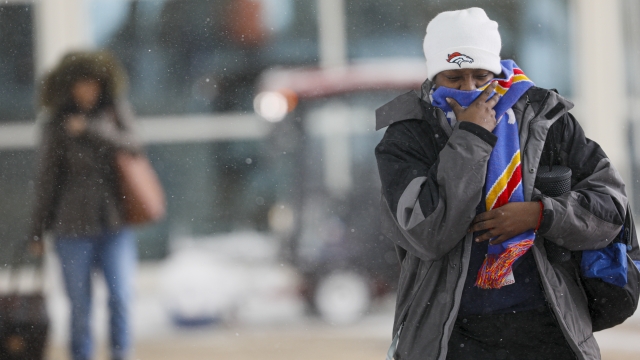 Blizzards, hurricane-like winds and a "bomb cyclone" threaten travel for millions trying to make it home for Thanksgiving.

Jeanette Casselano, a spokesperson for AAA, said, "This holiday weekend, AAA expects more than 55 million people to be traveling, and that's the most on record since 2005."

The National Weather Service warns two large storms — one on the West Coast and the other in the Midwest — will likely cause heavy traffic and flight delays.

In the west, storms continue to batter Oregon and California, with rainfall and hurricane-strength winds reaching up to 80 mph.

One traveler said: "My first time traveling up when it is snowing. Never really been out in the snow until today. We were trying to make it up there, but they are turning everyone around. I don't think it is going to be possible."

A traveler in Colorado said, "Sounded like it was going to be a pretty major storm, so that's why we thought we better get here early."

Across the Great Lakes, another storm is expected to bring freezing rain and snow as it moves toward New England. All this on some of the busiest travel days of the year, according to AAA.

Casselano said, "We expect the heaviest traffic volume in the afternoons ... because at that time, you'll see a lot of holiday commuters mixing with evening commuters on the road at the same time."

And that's stress that some drivers would rather avoid.