Millionaire Zappos CEO Lives In A Trailer With His Alpaca 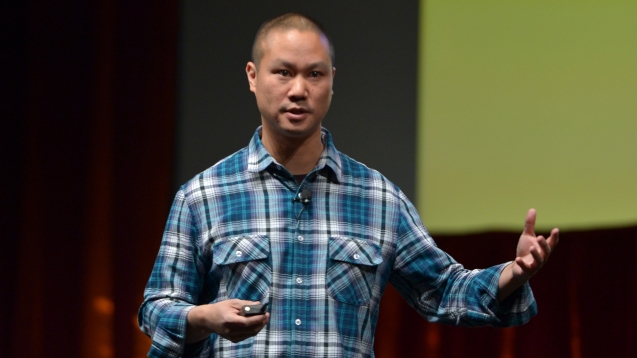 SMS
Millionaire Zappos CEO Lives In A Trailer With His Alpaca
By Becca Dunn
By Becca Dunn
July 20, 2015
Zappos CEO Tony Hsieh is known for his savvy investments. He also has a reported net worth of $850 million and lives in a trailer with his pet alpaca.
SHOW TRANSCRIPT

The CEO of Zappos, who has a reported net worth of $850 million and could probably buy just about anything he wants, lives in a trailer.

Tony Hsieh's 200-square-foot trailer looks similar to this. Nothing too special, although it does have two TVs. Fancy.

But he not only lives in a trailer park in Nevada, but he also owns it, too.

The New York Times reports Hsieh has invested $350 million in an attempt to "revitalize Las Vegas." The trailer park, which was once a vacant lot, is now crammed with Airstream trailers that visiting computer coders can rent.

And he reportedly calls his trailer Llamapolis.

Because, well, he shares his trailer with his pet alpaca. He recently Instagramed a picture of the animal hovering over him while he was in bed. #LlamaTrauma.

This isn't the first unusual thing Hsieh has done. Zappos' management strategy follows of Holacracy, which "enables employees to act more like entrepreneurs and self-direct their work instead of reporting to a manager who tells them what to do." So, basically, employees define their own jobs.

Sounds great in theory, but this form of leadership has its skeptics. According to Forbes, when Zappos employees were offered a severance pay to leave, 14 percent took it, which is quite the jump from the usual 1 percent attrition rate.

But there's no doubt Hsieh is known in the tech industry for his investments. He sold his first company Link Exchange to Microsoft for $250 million and sold Zappos to Amazon for over $1 billion in 2009.

A professor at the University of Nevada, Las Vegas, who's worked with Hsieh over the years, puts the Zappos CEO's unusual ideas into perspective: "These are pretty crazy experiments, but it's Tony. Sometimes he says things that don’t make any sense, but a few years later, they make sense. Maybe this is one of those."

Looks like we'll have to wait and see how Llamapolis plays out.