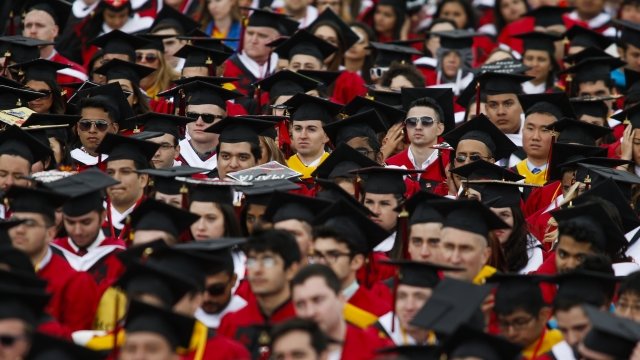 SMS
10 Years After The Recession, Millennials Still Struggle Financially
By Bianca Facchinei
By Bianca Facchinei
September 12, 2018
Stagnant wages and student debt are still crippling the ability to save, putting the entire economy at risk.
SHOW TRANSCRIPT

September 15 will mark ten years since U.S. investment bank Lehman Brothers collapsed, foreshadowing a global financial crisis known as the Great Recession. The U.S. economy may seem healthier now, but the recovery hasn't been felt across the board.

“The Great Recession has really, even officially, we tend to think it ended about two years in,” said Aparna Mathur, resident scholar in economic policy at the American Enterprise Institute. “Actually, in many many ways, and I think for a lot of people around the country, it continued even until a few years back.”

That couldn't be truer for millennials, many of whom may never fully recover from the recession. According to the St. Louis Fed, the net wealth of Americans born between 1981 and 1996 is 34 percent below what they would have if the financial crisis never happened.

There are a few reasons why.

"While you do see corporate profits at record highs and you do see unemployment at record lows, wages are really flat," said Alan Barber, director of domestic policy at the Center for Economic and Policy Research. "Nobody’s really seeing that recovery in their paychecks."

"Hand in hand with that lack of wage growth is also a very different kind of career trajectory in which you might not be in the same job for forty years, and it’s not a straight and steady path of raises," said millennial finance expert Stefanie O'Connell. "There are often career interruptions and that means benefit interruptions, and those present new challenges like paying for your own health insurance and saving for your own retirement."

That's made it hard for young people to save for things like a house or a car. It's also making it difficult to start a family, which poses unique problems for the greater economy.

"We already have in the U.S. the lowest birth rates that we've ever seen. We have a baby boomer generation that’s retiring, so we have this huge demand in the workforce that's not going to be filled unless fertility rates go back up, unless we adopt the right policies on immigration, and getting a workforce that's ready for those jobs," Mathur said.

In a recent New York Times survey, men and women ages 20 to 45 said they're not having kids for a variety of economic factors — most notably because it's too expensive. In fact, average child care costs in the U.S. range from nearly $700 to almost $3,000 per month.

With all of these economic challenges, it's hard to tell how millennials will manage paying off their student debt — perhaps the most infamous issue they face. On average, students graduate with over $30,000 in loans, further hampering the ability to save. If you ask economists, there's one silver lining in this situation. 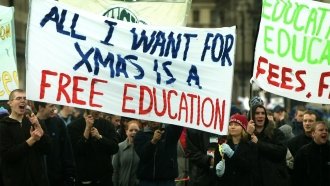 "I do think that if the future is technology, then this generation is the best adapted to using it and to using and acquiring those skills and being prepared for those jobs," Mathur said.

It is true that millennials are very adept at using technology, meaning they might be able to adapt better to the digital changes in the workforce than their predecessors. And, economists say, they still have their whole lives ahead of them.

"An important thing to think about here is that, since millennials are on the younger side, there is time," Barber said.