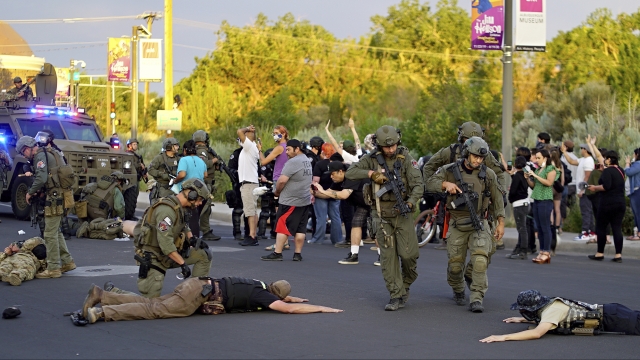 New Mexico Gov. Michelle Lujan Grisham says the goal of the armed "Civil Guard" was to "menace protesters" in Albuquerque.

Armed militia are being blamed for the shooting of a man during a protest in Albuquerque, New Mexico. Reports say the gunman was part of a group attempting to protect a statue being torn down by protesters.

The Albuquerque Journal says the man is listed in critical but stable condition.

The incident occurred Monday night as a crowd used a pickax to try to tear down a Spanish conquistador statue.

A civilian group tried to protect the monument. During a scuffle, gunfire rang out. Chaos followed, and Albuquerque police said "chemical irritants and flash bangs" were used to disarm and detain people involved in the shooting.

In a statement, Gov. Michelle Lujan Grisham said, “The heavily armed individuals who flaunted themselves at the protest, calling themselves a ‘civil guard,’ were there for one reason: To menace protesters, to present an unsanctioned show of unregulated force."

Police say they have arrested a 31-year-old man in the shooting but gave no details.

Across the country, demonstrations following the death of George Floyd were mostly peaceful.

But in Oregon, police said they closed part of downtown Portland after an officer was injured when he was hit in the head by a large rock.

Additionally, 21 protesters were detained in Tennessee for refusing to leave the grounds of the Capitol in Nashville.