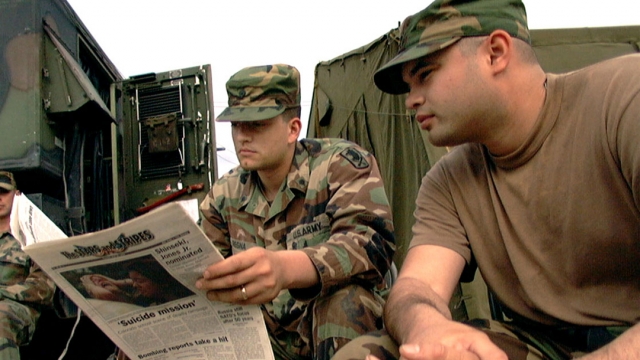 SMS
Military Watchdog Stars and Stripes Fighting For Survival
By Mark Greenblatt
By Mark Greenblatt
August 4, 2020
Bipartisan pushback is growing against a Trump administration proposal to cut all funding for the independent voice of American troops.
SHOW TRANSCRIPT

Stars and Stripes, the editorially independent news organization that serves the men and women of the U.S. military, is fighting for its own survival. A Department of Defense push to zero out the news organization's $15.5 million budget gained steam when the Senate passed its next budget for the Pentagon and included no money for the longtime military watchdog.

If the Senate version of the budget is adopted, it would serve a potential death blow to an entity that often scrutinizes Pentagon policies and exposes threats to troops deployed overseas.

"When I was in Iraq under the George Bush administration, Stars and Stripes was talking about the lack of armor," said former Marine and member of Congress, Rep. Ruben Gallego (D-AZ).

"Their advocacy, their interest in that spurred Congress to act and fund us to have better armor."

"What really happens if this passes: Stars and Stripes would just cease to exist," said Gallego.

Stars and Stripes has served the military community since the Civil War era. Today, it has more digital subscribers than those who read it in print.

The multi-platform, modern operation also connects with service members and their families through video documentaries and podcasts that go in depth on issues that have particularly high importance to the members of the military.

The news organization started a coronavirus electronic newsletter that contains information so specific to the military community it would often not be replicated by any other news source.

While Stars and Stripes is a part of the Department of Defense formally, its editorial independence is protected by Congress and it makes decisions on what to report without asking for approval.

In the midst of the coronavirus, its reporters revealed a DOD plan to keep open a military school for children of troops in Japan, even after public schools in the country had already been closed for weeks. The day after the Stars and Stripes report, DOD announced it would close the school.

"I have high regard for the major newspapers and networks of the United States. Nobody else covered that story," said Terry Leonard, editor of Stars and Stripes.

Leonard says he does not believe the DOD or Trump administration is retaliating against any one story.

"I think it is a difference of philosophy about the value of independent reporting," he said.

In responding to a question from Newsy about what would replace Stars and Stripes if it ceased to exist, the DOD emailed a statement citing the "proliferation of alternative news sources" and social media.

Russell Goemaere, a spokesperson for the Office of the Secretary of Defense, also said the Department would continue to  "make available timely and accurate information" on national security and defense issues.  He added, "Commanders and executive leaders throughout the Department have a responsibility to make information fully and readily available... This includes a free flow of general and military information to the men and women of the Armed Forces and their dependents."

The editor for Stars and Stripes said it was potentially "dangerous"  to have troops rely too heavily on military leaders for information.

"They're only going to get the command view of what they want to know," said Leonard. "Do you really want to live in a democracy where the people, you know, the troops don't have a free flow of information? Do you really believe some people in the command would not want to shut down that information?"

Newsy has learned bipartisan support to save Stars and Stripes is growing, including in the Senate.

"I'll work very hard to make sure that the spending does continue," said Republican Sen. John Boozman, the senior senator from Arkansas.

Boozman's father served more than 20 years in the Air Force, rising to the rank of Master Sergeant.

Boozman said the loss of reporting from Stars and Stripes would ultimately harm the welfare of our troops.

"They talk about housing in the military, all of these things that simply aren't going to be covered any place else," he said.

Boozman said Congress has two ways it can act to restore the news organization's funding.

He said members of the House and Senate are already meeting in conference to resolve differences between the two versions of the Pentagon's budget.

"I will be working very hard to make sure that the House language stays in," he said.

Boozman also said the Senate Defense Appropriations subcommittee, which he is a member of, still has time to step in before authorizing funding for the DOD's next fiscal year.  Boozman said he has support from other Republican Senators, who are the majority party in the Senate.

"I'm not alone by any sense," he said. "I think we're actually in good shape working towards getting it in the Senate appropriations package."

The press secretary for the minority side of the Senate Appropriations Committee, Jay Tilton, said the news organization can count on support from Sen. Pat Leahy, a Democrat from Vermont who serves as the committee's vice chairman. "Stars and Stripes has a long history of serving the men and women who serve our country and the Vice Chairman looks forward to raising this issue," he said.

Mark Greenblatt is the senior national investigative correspondent for Newsy and the Scripps Washington Bureau. Follow him @greenblattmark or email a story tip to mark.greenblatt@scripps.com.