Military Changes Hair Standards To Be More Inclusive For Minorities 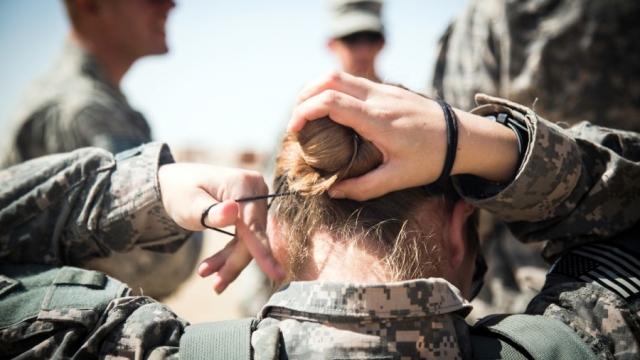 SMS
Military Changes Hair Standards To Be More Inclusive For Minorities
By Terace Garnier
By Terace Garnier
February 9, 2021
Women in the Army or Air Force can have shaved heads, ponytails and braids after the military admitted old rules discriminated against Black women.
SHOW TRANSCRIPT

Shaved heads, ponytails and braids are now allowed among women serving in the Army or Air Force. But it's about more than a hairstyle. Military leadership admits strict regulations disproportionately impacted Black women.

"It just opens the door for me to not feel like I have to be in this box. And I can just  show up as my true self," Samantha Payne said.

Master Sgt. Samantha Payne is one of the people who helped create change within the Air Force.

"When you can't show up, like, literally visually how you actually are, it just takes away from that. I don't feel like I want to stay in something that I don't belong to. I don't feel connected, because I'm not accepted for who I am," Payne told Newsy.

Beginning this week, women in the Air Force  will be allowed to wear their hair in different ways -- like a ponytail or two braids.

“My hair always breaks off. It gives me headaches. And it's just -- it also just takes away from me being a woman, honestly. Like, because I just have to pull all of my hair back," Payne said.

The Army is making similar changes, allowing female soldiers to shave their heads, wear ponytails and have braided twists or locs.

They can also wear lipstick and nail polish colors that are not considered extreme, and they will be allowed to wear earrings in their Army combat uniform -- a first in Army history.

Males in both branches are pushing for changes, too, like being allowed to grow a beard.

“I agree with them. You should be able to wear a beard, as long as it's in a certain standard and it looks professional,” Payne said.

For Master Sgt. Payne, more inclusive changes for men and women are important -- and just the start.

“I feel like ... there will be more retention of women of color that stay in the Air Force, just because now they don't have to worry about that,” Payne added.

The Air Force will begin implementing their new policy on Wednesday. And for the Army, their new regulations will be implemented later this month, while the Navy and Marines are reviewing their own grooming standards.