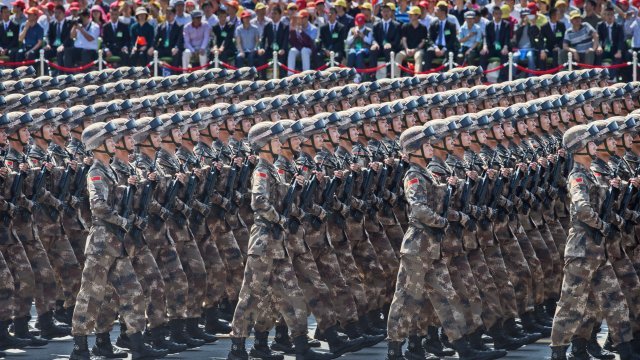 SMS
Military Parades Are A Global Go-To Tactic To Show Off Strength
By Matt Picht
By Matt Picht
August 17, 2018
The U.S. hasn't held a major military parade in years — but other countries routinely use parades to boost the image of their militaries.
SHOW TRANSCRIPT

The tradition of grand military parades has been out of fashion in the U.S. for a while. But President Donald Trump's plans to bring back the old practice appear to have been sunk by a high price tag.

The U.S. held its last high-profile military parade in 1991, to commemorate the end of the Gulf War. Since then, it's become more complicated and politically fraught to declare victory in the wars that followed.

Trump's desire for a parade was reportedly kindled by his visit to France's annual Bastille Day parade. The event celebrates France's revolutionary history, but it's also an opportunity for the country to flex its military might.

Pentagon Claims China Is 'Likely' Training Military To Target The US

One of the main reasons countries throw military parades is to showcase their might without having to blow anything up. Russia and China have both marked their significant World War 2 victories with massive parades featuring advanced military tech and thousands of troops.

The tactic is a favorite in nations with troublesome neighbors: rival nuclear-armed nations India and Pakistan both regularly feature ornate displays of military muscle in their parades.

And rogue states like Iran and North Korea are famous for using their military parades to showcase their ballistic missile programs respectively, sending a clear message to deter any hostile outside forces.

The U.S. military doesn't have a comparable parade tradition, but it still finds ways to show off its prowess. Routine exercises near potentially contested areas offer plenty of opportunities for the military to flex its might in front of its adversaries.