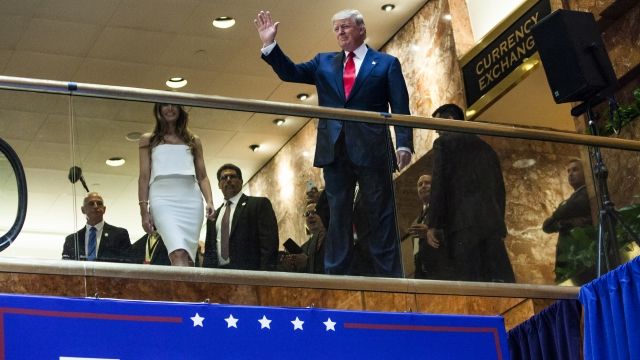 SMS
Military May Have To Pay Rent To Perform Duties At Trump Tower
By Ryan Biek
By Ryan Biek
February 8, 2017
Some question how much of that rent Trump would receive.
SHOW TRANSCRIPT

The Department of Defense says it needs a space inside Trump Tower for daily tasks — only it looks like it will have to pay rent.

Military staff — separate from the Secret Service — are always near the president. For instance, those handling the so-called "nuclear football" containing the president's launch codes must travel everywhere with him.

Although President Donald Trump now lives in the White House, his wife and youngest son still live in a Trump Tower penthouse.

The military said it's aiming for a space close to that penthouse, but that would likely make it more expensive.

Officials haven't said how much they want to spend. According to CNN, renting a floor in the tower costs about $1.5 million a year. The Secret Service already has a space in the tower near the first lady and her son. It's unclear exactly how much space the service rented or how much it pays for rent.

The Washington Post notes the military has had similar setups for past presidents, like Barack Obama's house in Chicago.

The difference here is President Trump has yet to show he's separated himself from the Trump Organization, which would receive the military's rent payments.