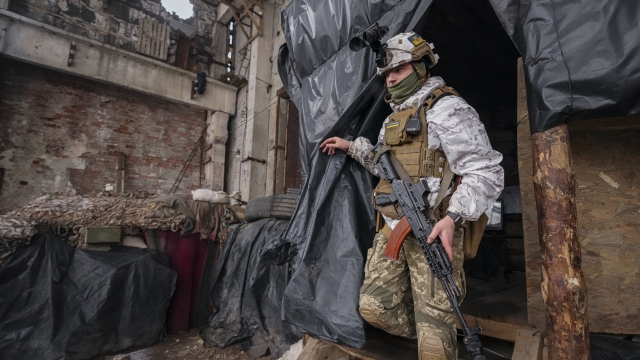 SMS
Russia, Ukraine, Belarus, U.S. Carry Out Military Exercises In Europe
By Jason Bellini
By Jason Bellini
February 4, 2022
As tensions simmer between Moscow and the West over Ukraine, Russia and Belarus have been mobilizing personnel and military equipment.

The Ukranian military on Friday showed U.S. soldiers training Ukranians on how to use a weapon designed to destroy hardened bunkers.

And NATO provided video of its exercises at sea. F-18 fighter jets from the USS Truman aircraft carrier flew over the Baltic states and Poland and Romania.

Not be outdone, Russia is producing its own show of force.

This is the opening act of combat-readiness, joint exercises in Belarus that are scheduled to continue for the next two weeks. One video was posted to the "Russian Military TV" YouTube channel for all to see.

Mark Cancian, a retired U.S. Marine Colonel and a professor of military operations, watched the video along with Newsy.

"This is intended to intimidate, you know, to show off all of the capabilities that the Russians have," he said. "Let's see what he's got. Oh, the rocket launcher, yeah, yeah, yeah, yeah."

JASON BELLINI: What would those rockets be used for?

MARK CANCIAN: This is a great strength of the Russians. The rockets would be used to attack ground targets. The advantage of rockets is that, as you can see, you can fire a lot of them, very quickly. So if you have a good target location, you can really smother it with fire.

Tanks and armored personnel carriers show how rapidly they're able to advance across open terrain.

BELLINI: How vulnerable are they to these weapons that the U.S. has sent to the Ukrainians?

CANCIAN: They're quite vulnerable ... Personnel carriers are carrying troops. Those would be highly vulnerable to javelins.

Javelin anti-tank missiles and launchers were part of a $200 million arms shipment the U.S. sent to Ukraine in January.

CANCIAN: I don't care how many javelins you have, they're going to roll over you.

Ukraine's defense minister Oleksii Reznikov reacted on Friday with skepticism to the notion that these exercises portend a Russian invasion: "Today, Russia's cumulative forces taking part in exercises in Belarus number several thousands" he said. "Which is not enough to carry out an independent invasion."

All sides are showing their strength and their preparations for a war — that all parties say they do not want to happen.