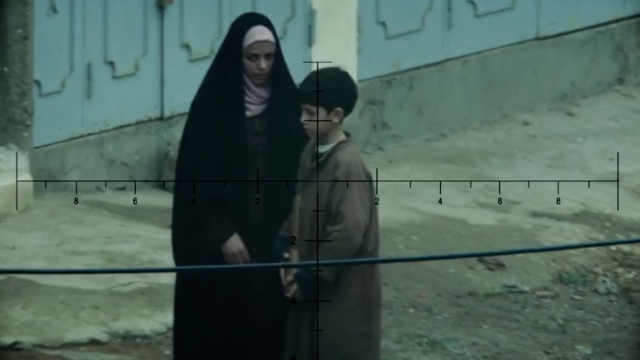 The U.S. Department of Defense has a lot of influence over Hollywood — and that's led to some damaging portrayals of Arab and Muslim communities.

Hollywood has a very narrow view of Arabs and Muslims.

I mean, just think of every Arab or Muslim character you've ever seen on screen. Think of how those characters are usually inherently connected to violence and U.S. national security, and then ask yourself this question.

"When have you seen a Hollywood film tell the story of an Iraqi during the Iraq War? ...You know any, Casey?"

Dr. Maytha Alhassen, a Syrian-American journalist and scholar, asked me this question when I was researching this story. And, even though I had spent the past week finding every possible film related to the portrayal of Arabs and Muslims on screen, I had literally never come across a movie like the one Alhassen asked about.

"And then what do you have after 9/11? You have films like 'Zero Dark Thirty,' 'Hurt Locker,' what else? That whole terror genre is told from the story of the military, right?"

Alhassen explains this in her detailed report "Haqq & Hollywood," a look at the industry's decades-long history of stereotyping, whitewashing and overall misrepresenting Arab and Muslim communities. Those misrepresentations are deeply motivated by U.S. politics and literally influenced by the Department of Defense.

"The tight relationship between the Department of Defense and Hollywood has been going on for a while."

A University of Bath investigation found that more than 800 feature films and 1,100 TV shows from 1911 to 2017 received support from the U.S. Department of Defense — which has its own entertainment liaisons.

Mark Harris, the author of a book on Hollywood's partnership with the military, told The Outline: "The most that happens is favor trading. You get access to military equipment in return for a favorable portrayal."

Even the CIA has its own entertainment liaisons. Propaganda researcher Matthew Alford said the agency's influence on movies like "Zero Dark Thirty" and "The Recruit" has "inflated real-world threats and dampened down government malfeasance."

Alhassen says the film "American Sniper" is especially damaging to viewers' understanding of the Iraqi people and and the U.S. military's role in their country. It was the top-grossing domestic movie in 2014, and it was nominated for the 2015 Oscar for best picture.

"And then you have TV shows that try to recreate this genre over and over again — this '24,' this 'Homeland' genre."

In an attempt to "flip the narrative," shows about U.S. national security and quote-unquote "patriotism" started featuring more Arab and Muslim characters — as long as those characters were willing to sacrifice themselves for American militarism.

"You, as a Muslim, have to be willing to die for this country. To sacrifice your life or sacrifice your children's lives to be accepted here. ...Within this 'Good Muslim/Bad Muslim' framework, the Good Muslim was also the one that the Democratic Party ran with at the DNC convening in 2016 at the convention."

After the 2016 election, when anti-Muslim assaults were at an all-time high, Hollywood writers and showrunners grew more conscious of how they represented Muslims in their work.

Howard Gordon, the showrunner for "Homeland," admitted he felt anxious about how his show might have inspired attacks against Muslims.

And shows like DC's "Legends of Tomorrow" and "The Bold Type" added multifaceted Muslim characters.

Shows similar to "Homeland" and "24" have continued coming out, but they haven't lasted as long as their predecessors.

"We do have a more sophisticated viewing audience  then, let's say, even five years ago.... I think these audiences are sick of this formulaic, cut-and-paste storylines around patriotic genres. And so, although Hollywood has continued to churn them out, it's not like these are the most popular TV shows out right now, right?"

Beyond correcting Hollywood's misrepresentations, advocates like Alhassen want to see more original works by Arab and Muslim creators themselves. Shows like the digital series "East of La Brea" or Hulu's "Ramy" allow Arab and Muslim writers to tell their own stories.

Editor's Note: Parts of an earlier version of this story only mentioned Arabs, but the video clips used include Persian and South Asian characters and actors.