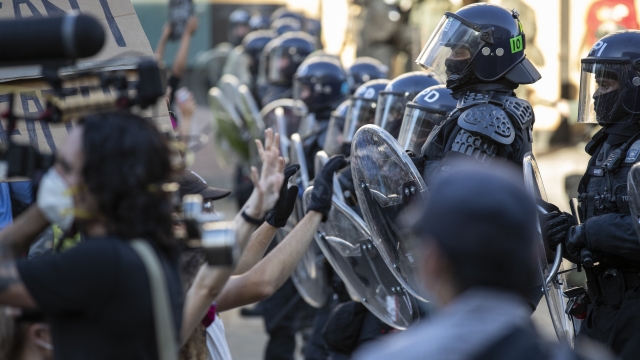 Multiple days of protests in the nation's capital led to an ominous threat Monday from President Donald Trump.

“If a city or state refuses to take the actions that are necessary to protect the life and property of their residents, then I will deploy the United States military and quickly solve the problem for them,” President Trump told reporters in the White House Rose Garden Monday.

“A governor could certainly invite the president to send in the military,” said Bert Johnson, a professor of political science at Middlebury College in Vermont.

“Then the governor would cede control over his or her own state by doing so."

On Tuesday, New York Gov. Andrew Cuomo, whose state has experienced violent protests, said he has no plans to call for military help.

“The president’s scenario is a political prop. It's a political spin,” Cuomo said at his daily press conference on Tuesday.

According to a senior official from the U.S. Department of Defense, no governors have requested the presence of U.S. military forces to quell protests in their states.

The president, however, retains jurisdiction over Washington, D.C., and can deploy the military without waiting for the green light from the district’s mayor.

“We don't think that the active-duty military should be used on American streets against Americans,” said D.C. Mayor Muriel Bowser. “Bringing in the military to do police work is inappropriate in any state in the United States of America without the consent of the governor, and it would be inappropriate in Washington, D.C.”

According to the Defense Department official, as of Tuesday afternoon a number of military police and other units have been deployed to the D.C. region and are staging just outside the district.

Mayor Bowser said Tuesday she was concerned to learn the Pentagon had requested Virginia and Maryland to dispatch the National Guard to the capital region.

In a statement, the chief of staff for Virginia's Democratic governor, Ralph Northam, told Newsy they declined the request due to “heightened concern based on the president's remarks that the administration is looking to use the guard to escalate — not deescalate — the situation.”

A spokesman for Maryland's Republican governor, Larry Hogan, however, confirmed the state has sent 116 members of its National Guard to help protect the nation’s capital.