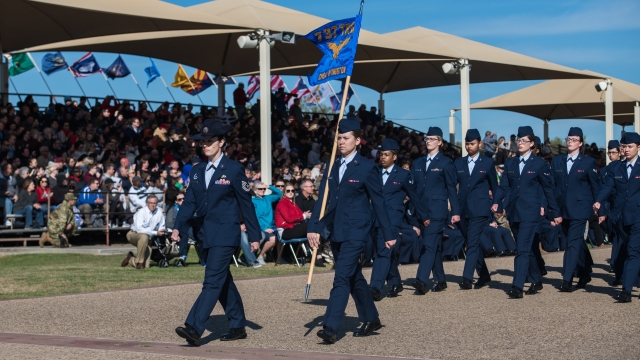 As recruits complete months of basic training to become full-fledged military members, families are finding out they may not be able to attend their son or daughter's graduation in person.

"It's just overwhelming, that kind of feeling not being able to be there for his first moment. He's my first son. And so leaving the nest and not being able to share in one of the biggest moments of his life is very sad," Melissa Mimlitsch said.

The day Nicholas left Arizona for training in Texas, Melissa Mimlitsch says she and her husband, Kenneth, began looking at flights to San Antonio to attend his basic military training graduation on Lackland Air Force Base in May.

"He came out of nowhere and decided that Air Force was what he wanted to do. My husband, being [a member of the] Marines, we definitely know that life, and we were excited that he was ready to do something greater than himself," Mimlitsch said.

Across the country in Indiana, Jamie Holland and his wife, Christina, were eagerly anticipating their son Matthew's graduation at Lackland on March 20 — until the disappointing news.

The Army, Air Force and Navy have all canceled public graduations until further notice.

"Not only do we have an Airbnb reserved, we've also got plane tickets for myself, my wife and my daughter, so we're going to have to see if we can get those refunded. So it definitely has impacted us, to do this. But more importantly, ... if you're joining the military, you want to see your family as soon as possible. So I can only imagine how this is going to impact all the trainees in their motivation," Jamie Holland said.

The way the military is communicating the cancellations has confused some families.

"I don't like the fact that they haven't said anything yet. Like, a message. I assume there's got to be a letter coming, or phone call. But yeah, I think that's got to happen soon," Mimlitsch said.

Lt. Cmdr, Frederick Martin told Newsy the Navy is giving recruits time to deliver the news. Other branches are using social media like Facebook to get the word out.

"We're members of a Facebook support group called Air Force Wing Moms. And if we wouldn't have looked on that website last night, we wouldn't know that he, you know, that we're not allowed to come home base," Holland said.

Right now, families have the option to view livestreams of graduations online. But as they point out, it's just not the same.

"I’m thankful I get something. But they're going to be working this hard and being away their first times, most of them. I think the first thought is they want to see their family. We want to see them. So it's going to be difficult not to be there and share that moment of pride and just love," Mimlitsch said.