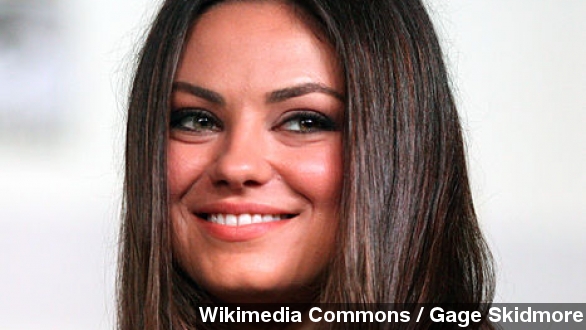 Well, this'll blow your mind: are Kelso and Jackie expecting? Mila Kunis and Ashton Kutcher's engagement news is only a month old after she started wearing a rather large rock on her left finger, and now — reports that she's pregnant.

"They aren't just planning their wedding, we have learned the couple is also preparing for their first child. New reports that Kunis is taking a pre-natal yoga class in Hollywood."​ (Via WVEC)

Although we can't say the news is definite. E! and other publications point to a "source" who says the 30-year-old actress is expecting. (Via E!)

But other outlets are saying THAT's just a rumor, though Kunis is pregnant. (Via Gossip Cop)

The two co-starred in "That '70s Show," which lasted from 1998-2006. Although they never dated during the show, they both reportedly found each other attractive, and clearly had onscreen chemistry. (Via Carsey-Werner Productions / "That '70s Show")

Kutcher and ex-wife Demi Moore finalized their divorce last November. Kunis has never been married, but was with "Home Alone" actor Macaulay Culkin for eight years. (Via TMZ, Us Magazine)

No word on how far along Kunis is, or when we'll hear those wedding bells toll. This would be a first child for both stars.

Funnily enough, Kunis has a new endorsement deal with Jim Beam. So, we'll see how all that plays out.