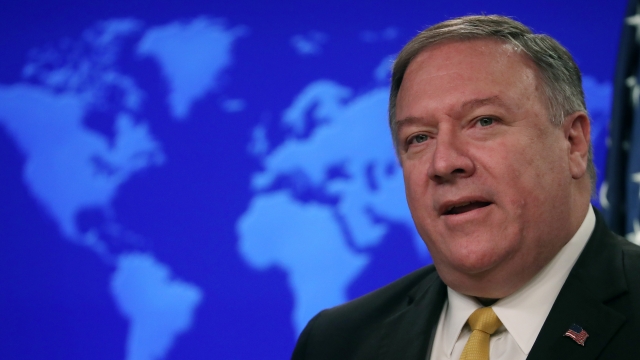 SMS
Mike Pompeo Unveils New Commission On Unalienable Rights
By Ahmed Jawadi
By Ahmed Jawadi
July 8, 2019
​The secretary of state said the commission will "provide [him] with advice on human rights grounded in our nation's founding principles."
SHOW TRANSCRIPT

Secretary of State Mike Pompeo has unveiled a new panel to review the role of human rights in U.S. foreign policy.

Pompeo announced the Commission on Unalienable Rights in a Wall Street Journal op-ed on Sunday. Speaking to reporters on Monday, Pompeo said the panel's purpose is to re-examine the topic of human rights and make sure that the discourse around human rights "not be corrupted or hijacked or used for dubious or malignant purposes."

"What does it mean to say or claim that something is, in fact, a human right? How do we know or how do we determine whether that claim that this or that is a human right, is it true, and therefore, ought it to be honored?" Pomepo said. "How can there be human rights, rights we possess not as privileges we are granted or even earn, but simply by virtue of our humanity belong to us? Is it, in fact, true, as our Declaration of Independence asserts, that as human beings, we — all of us, every member of our human family — are endowed by our creator with certain unalienable rights?

Pompeo said the committee will include "human rights experts, philosophers and activists, Republicans, Democrats and Independents of varied background and beliefs." It will be chaired by Mary Ann Glendon, a Harvard law professor and former ambassador to the Vatican under President George W. Bush. Glendon thanked Pompeo for prioritizing human rights "at this moment when basic human rights are being misunderstood by many, manipulated by many, and ignored by the world's worst human rights violators."

Reactions to the secretary of state's announcement were mixed. The conservative Family Research Council praised the new group, saying, "This commission will help further the protection of religious freedom, which is the foundation for all other human rights, and one which every government has a moral obligation to protect."

But Amnesty International wasn't as excited, saying the Trump administration "has actively worked to deny and take away long-standing human rights protections." It also said the group "politicizes human rights" and suggested its creation was "an attempt to further hateful policies aimed at women and LGBTQ people."