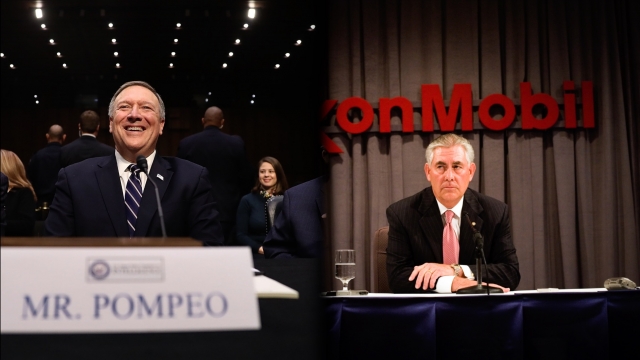 SMS
Pompeo Confirmed For CIA Head, Rex Tillerson Approved By Senate Panel
By Ethan Weston
By Ethan Weston
January 23, 2017
President Trump's CIA director pick was confirmed Monday, and his secretary of state is moving on for confirmation from the Senate.
SHOW TRANSCRIPT

The Senate was originally supposed to vote Friday on whether to confirm the nominee, but Democrats managed to stall the vote until Monday evening.

Pompeo — a former representative from Kansas — has a background in the military and graduated at the top of his class at West Point.

Another of Trump's nominees passed a major roadblock in his own nomination process Monday.

Rex Tillerson, Trump's choice for secretary of state, was approved by the Senate Foreign Relations Committee.

The committee voted 11-10 along party lines, but only after Sen. Marco Rubio said he would reluctantly support Tillerson.

The former CEO of Exxon Mobil has been a controversial nominee due to his close ties to Russian President Vladimir Putin.

Rubio wrote a Facebook post explaining why he decided to approve Tillerson's nomination. He wrote, "It would be against our national interests to have this confirmation unnecessarily delayed or embroiled in controversy."

Tillerson still has to be confirmed by the Senate before he can becomes secretary of state.