More Than 100,000 Migrants Tried To Cross Southern Border In April 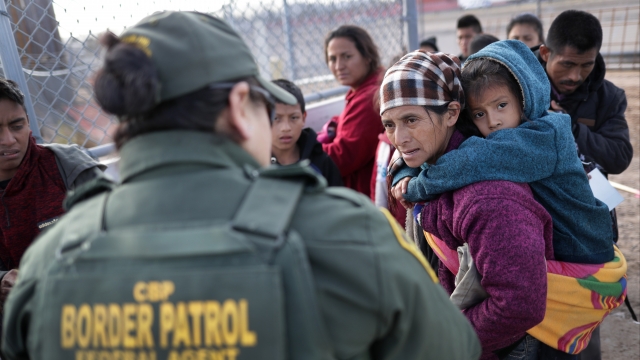 SMS
More Than 100,000 Migrants Tried To Cross Southern Border In April
By Katherine Biek
By Katherine Biek
May 9, 2019
Border agents apprehended almost 99,000 of those migrants between ports of entry last month.
SHOW TRANSCRIPT

For the second straight month, U.S. border agents encountered more than 100,000 migrants along the southern border.

According to statistics released by U.S. Customs and Border Protection on Wednesday, 109,144 migrants attempted to enter the U.S. from Mexico in April.

Border agents apprehended almost 99,000 of those migrants between ports of entry — that's the highest number of monthly arrests in more than a decade.

Agents additionally denied entry to more than 10,000 migrants who attempted to enter the country through a port of entry but were deemed "inadmissible."

While testifying before a Senate subcommittee on Wednesday, the chief of the Border Patrol, Carla Provost, said that "apprehension numbers are off the charts."

"We cannot address this crisis by shifting more resources or building more facilities. It's like holding a bucket under a faucet. It doesn't matter how many buckets you give me if we can't turn off the flow," Provost continued.

Last week, the Trump administration asked Congress for $4.5 billion in emergency spending to address what it referred to as the "humanitarian and security crisis" at the border.

The money would go toward humanitarian aid to help house migrants and border operations. The request is on top of the $8.6 billion in new border wall funding President Trump asked for in his most recent budget proposal.