As Mexico Cracks Down On Caravan, Migrants Board A Deadly Train North 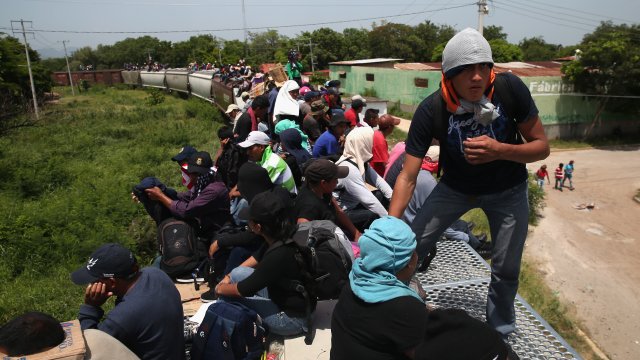 In a change of policy, Mexico is arresting and deporting migrants heading north, prompting many to flee to a dangerous train known as "The Beast."

Mexico is cracking down on migrants attempting to pass through to the United States. And hundreds are fleeing potential arrest in favor of a deadly form of transit - an infamous freight train line known as La Bestia, or The Beast.

Signaling a significant change in policy, Mexican police raided a caravan this week, arresting more than 370 Central American migrants in its southern state of Chiapas.

Mexico has issued more than 15,000 humanitarian visas to people seen as fleeing violence in Honduras, Guatemala and El Salvador. But it is now also deporting thousands of migrants as well.

The effort is seen as placating President Donald Trump. He has threatened multiple times to close the border, potentially imperiling billions of dollars in trade, if he feels Mexico is failing to address the migrant crisis.

The Associated Press reports this week the Mexican crackdown on a caravan of about 3,000 people is prompting streams of migrants to break away from the larger crowd and take their chances on La Bestia, which ferries goods north. They are climbing atop its cars for a perilous journey, often marked by gang crime and rapes, as well as falls that could injure or kill them.

"We don't want for them to just have free passage, not just out of legal concerns but for questions of safety," López Obrador said.

But the director of a migrant shelter in another southern Mexican state, Oaxaca, said he feels the crackdown is for another reason: it's bad optics.

He told the AP "If the migrants move quietly like a stream of little ants, they will allow them to. But they are not going to allow them to move through Mexico publicly or massively."