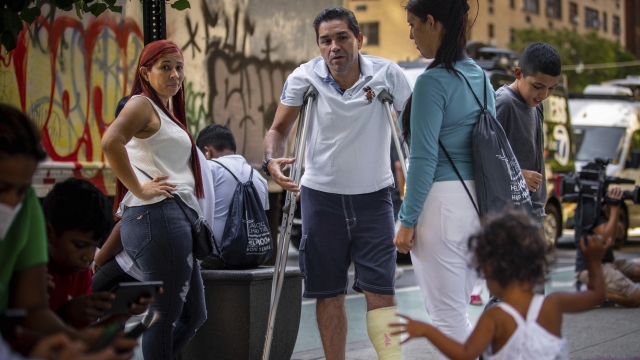 Walking through the streets of New York City has given Venezuelan migrant Pedro Perez a taste of freedom.

"I'm loving this," Perez said. "This is so diverse. You can walk and not feel uncomfortable because it really feels like welcoming, like a welcoming city."

It's a peace of mind the 22-year-old says he didn't have in Venezuela. Perez says his life was in danger because he had been in protests against Nicolas Maduro's regime.

"The government sent military forces to make us go," Perez said. "We ended up in a war-like battle against the military forces, and we were fighting for our right to education. My two older brothers got caught in that attack, and I ended up escaping."

Perez is one of more than 22,000 migrants that have been bused to New York City since the spring. Volunteers have been collecting donations and even opening their homes to help the asylum seekers, and now Perez has even become a volunteer himself, helping fellow migrants.

"We are getting almost 100 people, sometimes more than 100 people, coming back to the Port Authority Bus Terminal every single day," Thielmann said.

The camp includes bathrooms, showers, a laundry facility, and isolation tents for those who test positive for COVID-19.

Theilmann says the migrants are not getting what they need at the city's shelters, causing them to return to the bus stop for basic necessities.

"They're coming back to the one place that they know that they've been able to get assistance and food and clothing and a sympathetic ear and a friendly face from the very beginning, from the moment they set foot in New York City," Thielmann said.

Thielmann's volunteer group, along with other volunteers, are giving donations to migrants returning to the bus terminal.

"Piles and piles and piles of donated clothing, shoes, jackets, toys — we've got hats and scarves and all that stuff, and it's just been piling up," Thielmann said.

Perez, who is staying at a shelter, says he can attest to that.

"I have the experience of being in a shelter that is not providing the necessary for keeping people living there in bare minimum safe conditions," Perez said.

The volunteers have also provided legal counsel to help migrants with asylum cases.

"I would like to get a job," Perez said.

Perez is hopeful he can become a lawyer so he can help others. He says he's grateful for the long and dangerous journey because it led to freedom.

"I would like to be a productive member, a member of this society now that I'm here," Perez said.