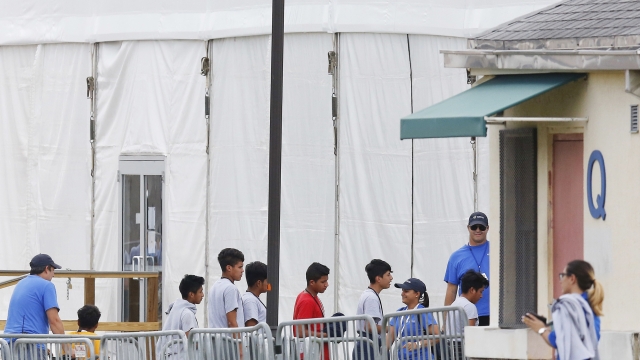 In the early days of his administration, President Biden signed an executive order forming a task force to reunify migrant families separated by the Trump administration.

"We're going to work to undo the moral and national shame of the previous administration that literally, not figuratively, ripped children from the arms of their families [and] their mothers and fathers at the border," said President Biden.

Now 100 days into the Biden administration, the task force has yet to reunite any of the remaining separated families.

"It's April now and not a single family has been reunited. And that is extremely troubling," said Lee Gelernt, deputy director of the ACLU immigrants' rights project.

Lee Gelernt is the lead attorney working on a case filed by the ACLU that sought to stop the Trump administration's family separation policy, which was aimed at deterring migrants from coming to the U.S. The organization has helped reunite thousands of children and parents since filing the 2018 lawsuit. He says at least 5,500 children were separated from guardians under Trump. And more than 400 families have yet to be reunited.

"We have not found more than 400 of those families. We have not located them at all," Gelernt said. "So we don't know what their situation is. We continue to search for them on the ground in Central America through databases in whatever way we can."

While the Biden administration has been slow to put the families back together, Gelernt says progress could be on the horizon. A Department of Homeland Security official told Newsy that the task force is working with the ACLU on the case but placed most of the blame on the Trump administration.

That statement reads in part: "In the short period of time that the Task Force has been in place and while they work to implement all the aspects of the Executive Order, they have worked tirelessly to review thousands of records and correct a significant number of issues in the existing files."

"I think one of the difficulties the Biden administration is having is that the people who were responsible for those policies left [the] government and didn't leave anything to help," said Theresa Cardinal Brown, a former DHS official and  managing director of immigration and cross-border policy at the Bipartisan Policy Center.

Despite these major challenges, behind the scenes, logistics are being worked out to bring the parents and children back together.

"We anticipate that there will be families coming in very soon," Gelernt said. "And so I think that we've now made progress on figuring out a process to allow families to reunite. We're hopeful that the process will now be put into place and very soon we will see families starting to come in."