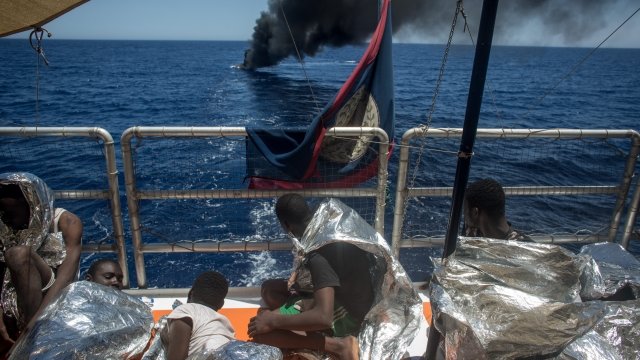 SMS
For 5th Straight Year, Migrant Deaths In Mediterranean Passes 1,500
By Ethan Weston
By Ethan Weston
July 27, 2018
The deadliest route is still the one that brings people to Italy and Malta.
SHOW TRANSCRIPT

For the fifth year in a row, over 1,500 people have died trying to cross the Mediterranean to Europe, according to the U.N.'s migrant agency.

The International Organization for Migration says the deadliest route is still the Central Mediterranean route, which brings people to Italy and Malta.

But the IOM says Spain has overtaken Italy as a preferred landing site for migrants this month. That's in part due to Italy's new government, which has taken a more hard-line stance on allowing migrants into the country by sea.

Other countries are also turning away people trying to enter Europe by sea. One boat carrying 40 migrants has been forced to remain at sea for two weeks after four countries, including Italy, refused to give it permission to dock.

The EU has been working to solve its migrant crisis for a while now. Last month, the bloc of countries struck a deal to spread out where migrants are received, but most of the solutions they agreed to were on a voluntary basis.