Officials In Midwest Begin To Add Up Cost Of Historic Flooding, Storms 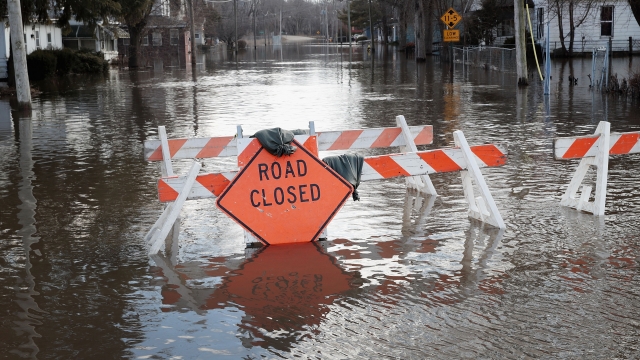 SMS
Officials In Midwest Begin To Add Up Cost Of Historic Flooding, Storms
By Briana Koeneman
By Briana Koeneman
July 5, 2019
Back in April, Accuweather estimated the total damage and losses from this year's historic flooding will add up to $12.5 billion.
SHOW TRANSCRIPT

As residents across the Midwest continue to recover from flooding, tornadoes and other storms that have impacted the region this year, officials are beginning to assess the damage.

In April, Accuweather estimated the total damage and losses from this year's historic flooding will add up to $12.5 billion. But state and local officials say they haven't started to tally all the costs.

A spokesperson for the Illinois Emergency Management Agency told The Wall Street Journal they won't know exactly what they're dealing with until the floodwaters recede.

Officials in Iowa told the outlet the first bout of flooding in the state caused $2 billion in infrastructure and economic losses. And Nebraska came up with a similar damage estimate.

Weeks of heavy rainfall and snowmelt in the Midwest caused rivers and streams to rise to record-breaking levels in some areas. So far this year, President Donald Trump has approved disaster declarations in at least 19 states because of strong storms or flooding.