The Midwest Floods Could Be A Preview Of The Region's Future 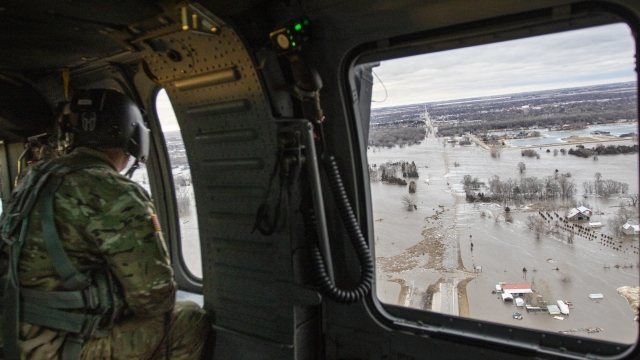 SMS
The Midwest Floods Could Be A Preview Of The Region's Future
By Tyler Adkisson
By Tyler Adkisson
April 12, 2019
The warming climate has lead to more annual global precipitation. In the Midwest, the recent historic floods could become more common.
SHOW TRANSCRIPT

Parts of the Midwest are still underwater from historic flooding along the Missouri and Mississippi rivers — and weather experts are warning that this may only be start of more extreme flooding to come this Spring. Meteorologists also say it's likely that these historic floods could be a result of climate change, and could occur more often in the future.

In the near term, NOAA's Spring outlook predicts the Midwest will see a "potentially unprecedented flood season" because of higher-than-average precipitation. River basins in the Upper Midwest saw rain and snow totals that were 200% above normal this spring. 42 locations across the Midwest set new record river levels.

Early spring storms could prolong flood risks. Parts of the upper Midwest and Plains states have seen more than two feet of snow in April, and depending on how quickly it melts, it could cause more river flooding downstream for areas still dealing with March's winter storms.

This heavy precipitation and the floods that come with it may also be signs of a longer, climate-based trend. A 2014 national climate report found Midwest precipitation levels have risen in the last century — and are expected to keep rising. This is partly because as the planet gets warmer, more water evaporates and circulates in the atmosphere, and snow and ice melt earlier than usual.

We've seen how this could set Midwest economies back tremendously, especially agriculture-based ones. Nebraska flooding has already caused roughly $1 billion in damages to crops and cattle, and nearly $500 million more to roads, highways and levees. Iowa's agricultural economy is expected to take $2 billion in damage, but officials said that number would likely climb more.