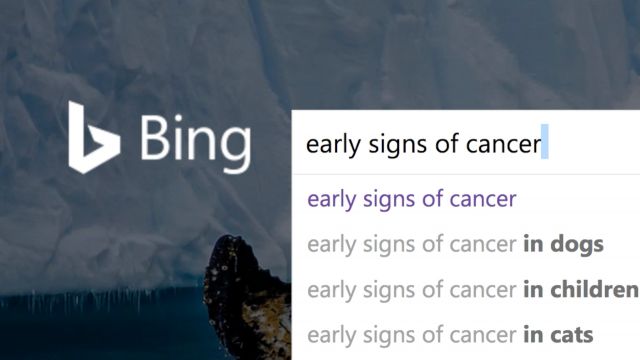 Your search history says a lot about you — maybe too much — but could it one day save your life?

Researchers at Microsoft say they were sometimes able to predict whether people had pancreatic cancer by looking at their search history.

The idea is to one day train Microsoft's algorithms to flag someone as being at risk, something one of the researchers called a "Cortana for health."

The team looked at anonymous Bing search data for clues that a user had been diagnosed. Then they studied that user's history to look for early warning signs — like searches for symptoms — and were able to identify 5-15 percent of cases early.

That doesn't sound like a lot, but there's a reason they chose pancreatic cancer. Its symptoms are so subtle that the disease has usually progressed pretty far by the time it's diagnosed.

So even that 5-15 percent chance of finding the cancer early could save lives. And scouring search results also avoided the big drawback of a lot of cancer screening methods: false positives.

Testing positive for cancer when you don't have it can be stressful and lead to lots of painful and expensive procedures, so Microsoft's researchers focused on keeping false positives low — a rate of less than 1 per 10,000 cases.

Of course, for this to be useful, people have to be willing to hand over their search histories.

This video includes clips from Microsoft and images from Ed Uthman / CC BY 2.0.