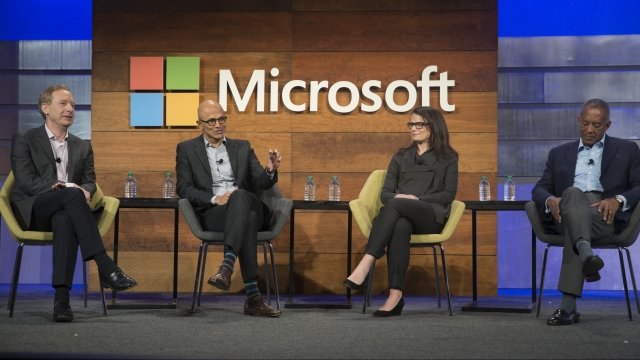 SMS
Microsoft To Pursue Pentagon Cloud Bid Despite Employee Concerns
By Ahmed Jawadi
By Ahmed Jawadi
October 26, 2018
The Joint Enterprise Defense Infrastructure – or JEDI – cloud is a project to revamp the Department of Defense's IT systems.
SHOW TRANSCRIPT

Microsoft will not withdraw its bid for the Pentagon's $10 billion cloud contract despite employee protests.

The Joint Enterprise Defense Infrastructure – or JEDI – cloud is a project to revamp the Department of Defense's IT systems, including moving its operations into a single cloud vendor.

Microsoft President and Chief Legal Officer Brad Smith defended the company's decision to pursue the bid in a blog post Friday. He said the company has worked with the U.S. Department of Defense for decades and wants to keep supporting and supplying the military with "the nation's best technology."

There have been growing concerns in the tech industry about crafting technology, especially artificial intelligence, for weapons and warfare.

Smith said the company acknowledges the ethical issues at hand, but said it’s important the tech industry be a part of the conversation and to help make sure the technology is being used wisely. He also said he respects employees disagreeing with the decision, and that they don't have to work on the JEDI project if Microsoft wins the contract.

The news comes a little more than two weeks after Google dropped its bid for the contract after thousands of its employees signed an open letter in opposition to the project.