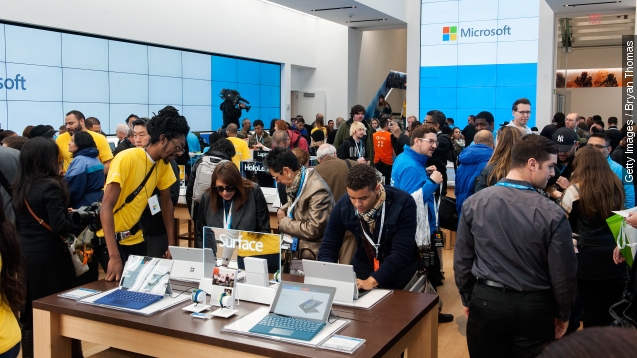 Microsoft's New York flagship store opened its doors Monday. It's located near the famous Fifth Avenue Apple store, but that's not where the similarities end.

The first thing people see as they get inside are the gadgets Microsoft is most proud of: the Surface Pro 4 and the Surface Book. (Video via USA Today)

The rest of the company's products, and even some partner products, are displayed throughout the five-story building. (Video via Engadget)

Visitors have already remarked about how the layout and generally open feel of the store are reminiscent of an Apple store. (Video via The Verge)

"We want you to sit down, play and get hands-on," a store manager told Marketplace. But the store's products are also untethered. "Say you were thinking about a Surface Book but you also wanted to compare that with another laptop; you can walk this back there."

There's the potential for a lot of products to be walked right out the door, but if it's anything like an Apple store (which we've already established it is), there will likely be a lot of hands on deck to deter thieving. (Video via CNBC)

USA Today adds: "Similar to an Apple Store there are no noticeable cash registers or checkout stations. ... Instead Microsoft is relying mainly on mobile point of sales systems." The store also accepts mobile payments from services, including Apple Pay.

Microsoft's Answer Desk is also strikingly similar to how the Genius Bar service works. Those who staff the desks will help out with all issues related to Microsoft products, whether the gadget was bought at the store or not.

Microsoft's new flagship joins more than a hundred retail locations already selling the company's devices. And another flagship is set to open in Sydney, Australia, on Nov. 12.