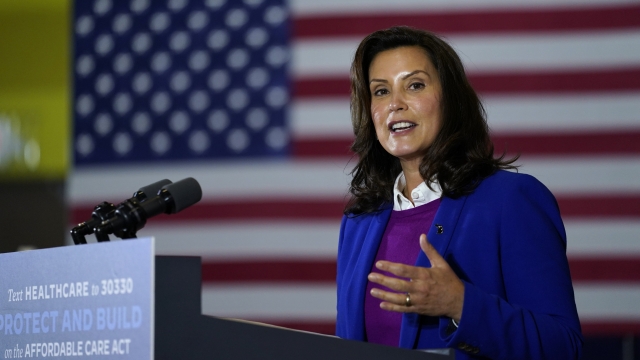 Hospitalizations are at a record high.

Cases are surging across the country.

Take a look at this data from Johns Hopkins University and the COVID Tracking Project.

The number of reported cases has gone up more than 10 percent over the past week, with the U.S. reporting an average of more than 140,000 cases per day.

Testing has increased by just about 7 percent during that same time, as deaths near a quarter of a million. And hospitalizations are at a record high, with nearly 70,000 people in the U.S. hospitalized.

These numbers have prompted states to roll back re-opening plans and impose restrictions. Governors in Michigan and Washington announced new COVID-19 restrictions that will begin this week.

Indoor dining at restaurants and public events at large venues will be banned, and in-home gatherings will be limited.

In Washington, the changes will last four weeks starting tomorrow. In Michigan, new restrictions are planned for at least three weeks starting Wednesday.

"Certainly community spread is a reality here, we have to get serious in order to save lives," Whitmer said. "So curtailing these indoor gatherings is the key to getting these numbers down and saving lives."

Many health officials are worried the combination of cold weather and the upcoming holiday season will drive cases up as people gather indoors.

A number of states and major cities have added new restrictions as cases rise across the country.

As we've seen since the pandemic started, not everyone is in favor of this. One White House coronavirus adviser has criticized Michigan's new restrictions. On Twitter, Dr. Scott Atlas said people in the state to should rise up against the restrictions.

Michigan's attorney general called the tweet irresponsible. And later, Atlas clarified he was not talking about violence.

Atlas has publicly voiced his opposition for lockdown efforts in the U.S.