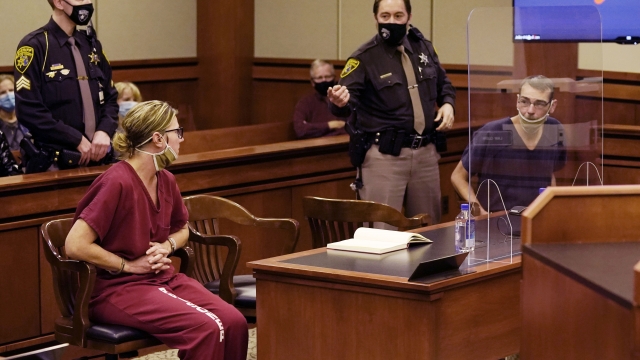 SMS
Michigan Suspect's Parents Ask To Lower $500K Bond
By Ben Schamisso
By Ben Schamisso
January 6, 2022
They were arrested a month ago following accusations of buying a handgun for their son and then failing to intervene before a school shooting.

James and Jennifer Crumbley have been jailed on a $500,000 bond since their arrest a month ago.

They are accused of buying a handgun for their son and then failing to pull him out of school after being showed disturbing drawings he made hours before the shooting tragedy at Oxford High School Nov. 30.

"The gun recovered from the shooter at the school after the shooting was the same gun that was purchased by his father, James Crumbley, on November 26, 2021 in the presence of his son," Oakland County prosecutor Karen McDonald said.

Prosecutors said they charged the parents because they knew their son was potentially violent and "did nothing."

"Further investigation revealed that the SIG Sauer 9mm handgun purchased by James Crumbley was stored unlocked, in a drawer in James' and Jennifer's bedroom," McDonald continued.

The parents' lawyer is asking for the bond to be slashed to $100,000, arguing they're unlikely to skip town during their case and would agree to electronic monitoring.

It's an argument that some legal experts not involved in the case say is fair.

"The whole idea is you want to be able to help your client and it's going to be a whole lot easier to assist your client if he's out on bond where you can meet him in your office," criminal defense attorney Ray Cassar said.

But the argument is undercut by the fact that the parents had to be hunted down by police after being charged.

Jennifer and James Crumbley are each charged with four counts of involuntary manslaughter — one for each Oxford High school Student allegedly shot and killed by their 15-year-old son.

Six other students and a faculty member were injured.

If convicted, the Crumbleys face up to 14 years in prison for each count.

As for their son, he is charged with 24 felonies including four counts of murder and one count of terrorism.

He will be tried as an adult and faces life in prison if convicted.