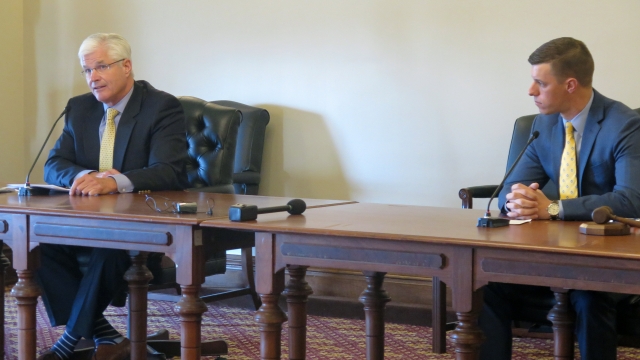 SMS
Michigan's GOP-Majority Legislature Sues Gov. Gretchen Whitmer
By LeeAnne Lowry
By LeeAnne Lowry
May 7, 2020
It's in response to an executive order Whitmer signed to extend Michigan's state of emergency for the coronavirus pandemic through May 28.
SHOW TRANSCRIPT

Michigan's Republican-controlled Legislature is suing Democratic Gov. Gretchen Whitmer. They say she wasn't approved to extend an emergency declaration that is keeping some businesses closed.

Last week, Whitmer signed an executive order to extend Michigan's state of emergency for the coronavirus pandemic through May 28. The Michigan House speaker tweeted that Republicans tried to work with her, but "instead she chose court." The Detroit Free Press quoted a Whitmer spokesman saying that the GOP lawsuit is a “partisan game."

State lawmakers filed the lawsuit on Wednesday. The state's Senate majority leader said in a statement the legislature didn't expect the emergency declaration to be extended, but instead "we saw the governor ignore the law, unilaterally extend the emergency, and write new executive orders. If left unchecked, the governor could extend her authority indefinitely."

The lawsuit was filed with the Court of Claims, but is expected to end up in the Michigan Supreme Court.

The state's stay-at-home order will continue through May 15.