Wolf's Correspondents' Dinner Speech Was A Blunt Rebuke, And Explicit 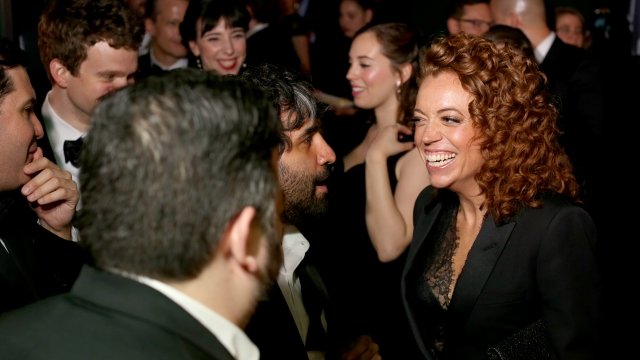 The White House Correspondents' Dinner was a little raunchier than usual, thanks to Michelle Wolf. Not everyone's OK with that.

Comedian Michelle Wolf left quite an impression on attendees and viewers of the White House Correspondents' Dinner on Saturday night ... and depending on who you are, those impressions were very different.

Wolf's speech was expletive-laden and blunt.

"It turns out the president of the United States is the one p---- you're not allowed to grab," Wolf said.

"Mike Pence is also very anti-choice," she said. "He thinks abortion is murder. Which, first of all, don't knock it 'til you try it. And when you do try it, really knock it. You know, you gotta get that baby out of there."

"If a tree falls in the woods, how do we get Kellyanne [Conway] under that tree?" Wolf said. "I'm not suggesting she gets hurt, just stuck."

And while some labeled the speech Sunday as mean-spirited in general, Wolf's hits on press secretary Sarah Sanders got a lot of attention in particular.

What Actors Gain From Going To The White House Correspondents' Dinner

For the second year in a row, attendees won't see the president at the event.

"I actually really like Sarah," Wolf began. "I think she's very resourceful. Like, she burns facts. And then she uses that ash to create a perfect smoky eye. Like, maybe she's born with it, maybe it's lies."

Prominent journalists and pundits were calling for the White House Correspondents Association to apologize to Sanders on Sunday. The association's president, Margaret Talev, told Politico some of Wolf's jokes made her uncomfortable and "did not embody the spirit of the night. And that is protected by the First Amendment."

That last point is what a lot of Wolf's defenders stuck to after her speech. The dinner was intended to be a celebration of the First Amendment, and Wolf was exercising that right. Many were also quick to point out that Wolf criticized everyone in the room, not just one side or the other, and that she was criticizing a pattern of being less than forthright with the facts.