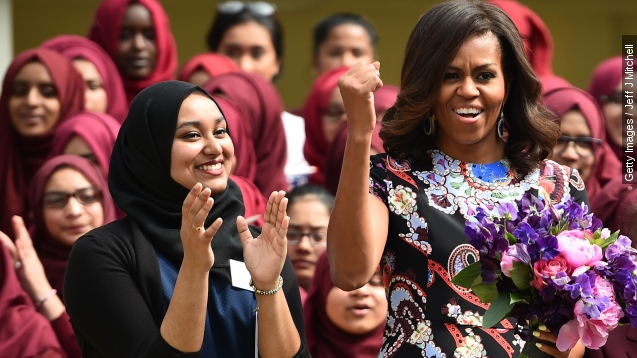 The First Lady is traveling all around Europe to bring awareness to her various charities.

Michelle Obama's first stop is in the UK, where she touched down with her daughters, Malia and Sasha, Monday.

Her main focus while visiting the UK will be on her Let Girls Learn initiative, which she and her husband, President Barack Obama, created back in March. (Video via The White House)

"Sixty-two million girls around the world who should be in school are not, and that's not by accident. It's the direct result of barriers, large and small, that stand in the way of girls who want to learn. ... Even today, in too many parts of the world, girls are valued more for their bodies than for their minds," President Obama said.

The Obamas are joined in their efforts by the United States Agency for International Development, or USAID, which has focused on improving education for females all over the world for many years.

The First Lady traveled to Cambodia and Japan earlier this year to drum up support for the Let Girls Learn initiative. (Video via The White House)

Besides meeting with Prince Harry and Prime Minister David Cameron while in the UK, Obama will also speak at The Mulberry School for Girls, whose student population is mostly made up of students whose families immigrated from Bangladesh.

Later this week, Obama and her daughters will continue traveling on to Italy to promote her Let's Move campaign to help fight obesity in children, and the Joining Forces initiative, which focuses on service members and their families.