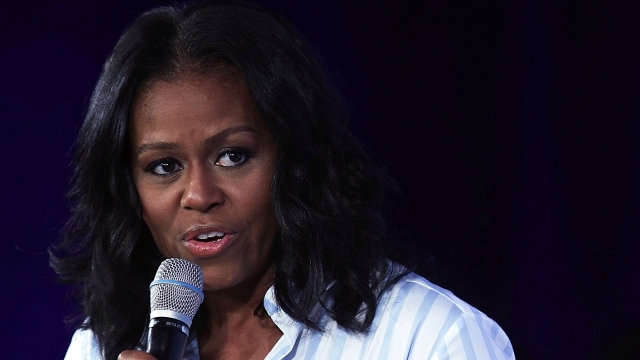 She may have left the White House, but former first lady Michelle Obama is still fired up about healthy eating.

"Think about why someone is OK with your kids eating crap," Obama said. "Why would you sit idly and be OK with that? Because here's the secret: If somebody is doing that, they don't care about your kid."

Obama spoke at the annual conference for Partnership For A Healthier America, for which she's the honorary chair, on Friday.

And she was sure to mention the school lunch program — something her Let's Move! campaign successfully sought to make healthier. The Trump administration relaxed some of the new nutritional rules for those lunches just days ago.

Schools won't have to cut as much sodium in the next few years as they had been expected to. And schools that have trouble offering all-grain products can get exemptions.

"We've got to make sure we don't let anybody take us back. ... You have to stop and think: 'Why don't you want our kids to have good food at school? What is wrong with you? And why is that a partisan issue?'"

Obama never actually mentioned the administration by name. But she didn't hide her feelings when the moderator — the former executive director of Let's Move! — brought up another recent change and one being considered.

The Food and Drug Administration has delayed the implementation of a requirement that restaurant chains provide nutritional information on the menu.

"Delay on menu labeling so we don't have basic information to make choices in restaurants," moderator Sam Kass said.

"You shouldn't know what you're eating," Obama responded. " ... We have to look our neighbors in the eye and kind of go, what is going on? Because this just isn't that complicated."