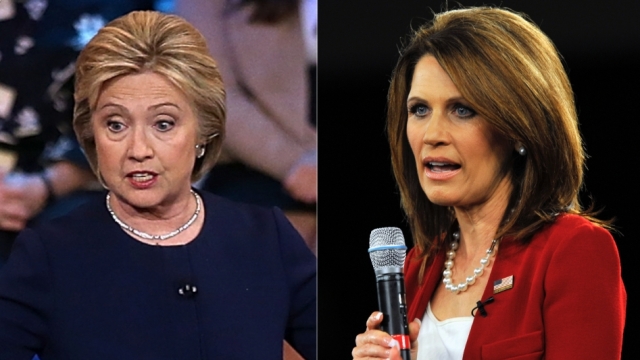 SMS
Michele Bachmann Condemns Clinton As Candidate With 'Fascist Values'
By Briana Koeneman
By Briana Koeneman
March 18, 2016
She said of Clinton's coal industry comments, "This is something more than a candidate who's in line with fascist values would put forward."
SHOW TRANSCRIPT

Former Republican Minnesota Congresswoman Michele Bachmann is not a fan of Hillary Clinton's recent comments about cutting jobs in the coal industry.

"This is something more than a candidate who's in line with fascist values would put forward," Bachmann told MSNBC's Chris Matthews.

During an interview with MSNBC on Thursday, Bachmann was asked if Donald Trump were to get the Republican nomination, could he possibly drive women to vote for Hillary Clinton come November?

And she was quick to point out this comment Clinton made during a CNN town hall over the weekend.

"I'm the only candidate who has a policy about how to bring economic opportunity using clean renewable energy as the key into coal country. Because we're going to put a lot of coal miners and coal companies out of business," Clinton said.

Clinton's remarks there didn't sit well with some people, especially lawmakers from coal country. Two days after the town hall, she sent a letter to West Virginia Sen. Joe Manchin to "clarify" what she meant.

It read, "I wanted to make the point that ... while coal will be part of the energy mix for years to come ... we have already seen a long-term decline in American coal jobs and a recent wave of bankruptcies as a result of a changing energy market."

This video includes clips from Donald J. Trump for President Inc., Hillary for America, C-SPAN and KSHB and images from Getty Images.