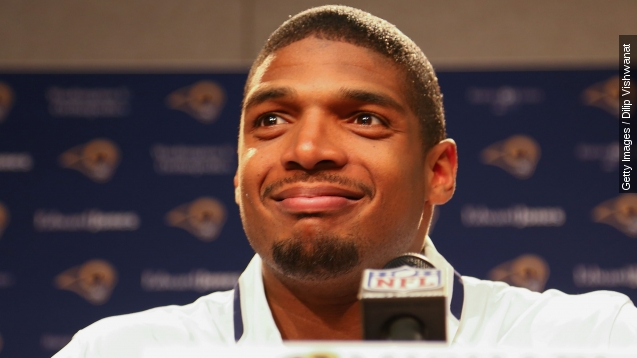 Michael Sam may have hit a few road blocks as far as making it in the NFL, but that won't stop him from playing professionally.

Sam signed a two-year contract with the Canadian Football League's Montreal Alouettes last Friday. He was officially introduced by the team Tuesday, appearing very humble as he spoke with reporters. (Video via Montreal Gazette)

"I'm just here to play football. I'm not really trying to do anything historic here by being with Montreal, just trying to help the team win some games, so we can bring the Grey Cup back home," Sam said.

Sam also expressed gratitude for the opportunity, though he might need to make some adjustments to his Twitter handle.

Last year, the St. Louis Rams selected Sam in the seventh round of the NFL Draft.

In doing so, he became the first openly gay player to be drafted in the NFL, but his career hadn't progressed much further than that until now. (Video via The Coca-Cola Co.)

The Rams cut the former SEC Co-Defensive Player of the Year before the regular season started.

The Dallas Cowboys later picked him up to play on their practice squad, but it wasn't long before he was released again. (Video via Visa)

With the move to Montreal, Sam will make history again as the first openly gay player in the CFL. And, even though Sam says he's excited just to be playing football, he hasn't ruled out another attempt at the NFL if the opportunity arises.

The new deal to play in the CFL isn't the only thing Sam has to be happy about lately. In February, Human Rights Campaign honored Sam for inspiring LGBT youth, awarding him with their Upstander Award.