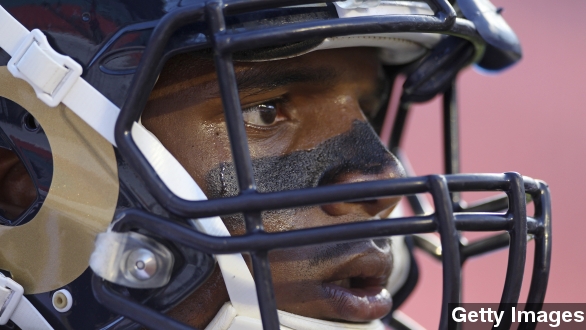 Although Sam recorded three sacks and 11 tackles in four preseason games, the consensus from sports writers and analysts is that he was outplayed by another NFL hopeful.

ESPN: "It's clear to them that Ethan Westbrooks has been the better player."

ST. LOUIS RAMS: "Ethan was making a lot of plays every time I looked. I didn't really see anything good or bad out of Mike, but we'll look at the tape, but he played hard and he got a lot of snaps."

Sam tweeted this message shortly after the announcement: "The most worthwhile things in life rarely come easy, this is a lesson I've always known. The journey continues."

So, what's next for Sam? He's now a free agent and, as it turns out, his fate might be decided within the next 24 hours.

That's the time other NFL teams have to claim him for their 53-man roster or their 10-man practice squad, according to CBS Sports. And there are already a few ideas floating  around as to which teams should snatch him up.

Bleacher Report points out the Dallas Cowboys, Indianapolis Colts and Atlanta Falcons all could use a little help on the defensive end — either because of injuries or poor performance. Another pass rusher could be a much-needed boost for any of those teams.

But maybe the more likely outcome is Sam staying put in St. Louis and joining the team's practice squad. USA Today cites the reasoning on why St. Louis makes sense for Sam, which others agreed on when he was first drafted.

"​St. Louis was the perfect spot for Sam to begin his NFL career. He was drafted by one of the NFL's most respected head coaches in Jeff Fisher and joined a team with strong veteran leaders. ... Sam also initially remained close to Columbia, Mo., where he had been open about his sexuality to his Missouri teammates and on campus for a year without issue."

Wherever he ends up, Sam will carry with him something invaluable: proof that he can perform at the professional level. And it doesn't hurt to have an endorsement from Rams Head Coach Jeff Fisher.

Reporter: "Did Michael Sam prove in this preseason that he can make it, that he can play in this league?"

Fisher: "I believe he can play in this league. Yes. Yeah."