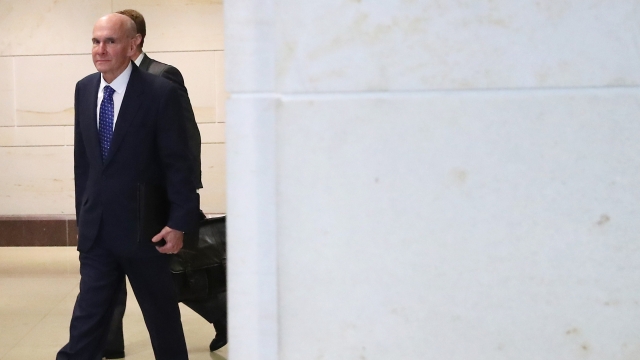 The transcript of Michael McKinley's deposition directly contradicts a statement from his old boss, Secretary of State Mike Pompeo.

McKinley sat for a deposition on Oct. 16 in front of dozens of lawmakers. He was a career State Department employee who most recently worked as a senior adviser for Pompeo, a position he left in mid-October.

He resigned, in part, because he thought the State Department was failing to support its Foreign Service members, specifically former Ambassador to Ukraine Marie Yovanovitch. She was forced out of her position overseas after what she called a "concerted campaign" to get her fired, which was fueled at least in part by false accusations.

McKinley testified that he talked to Pompeo three times about issuing a public statement of support for her. He told lawmakers: "I did grow concerned that we needed to say something forceful on her behalf. Because I worried that there would be a mischaracterization of what she had done, and we needed to be forceful, supporting her professionalism."

McKinley said his conversations with Pompeo about the issue were brief. But in an Oct. 20 interview on ABC's "This Week", Pompeo denied ever talking to McKinley about publicly supporting Yovanovitch.

"From the time that Ambassador Yovanovitch departed Ukraine until the time that he came to tell me that he was departing, I never heard him say a single thing about his concerns with respect to the decision that was made," Pompeo said.

"So you were never asked to put out a ..." ABC's George Stephanopoulos asked.

"Not once. Not once, George, did Ambassador McKinley say something to me during that entire time period," Pompeo said.

McKinley testified that Pompeo was the person who ultimately decided not to issue a public statement of support for Yovanovitch. McKinley said he was told the secretary didn't want to bring any extra attention to the situation.