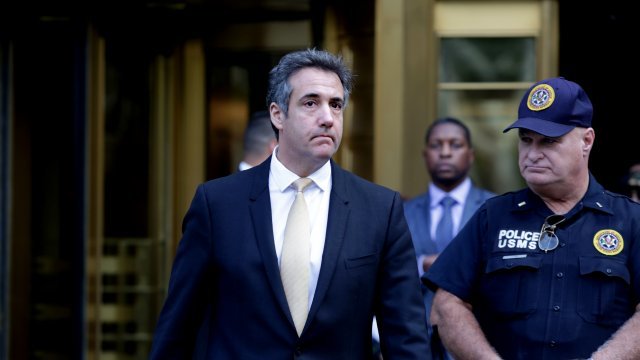 Michael Cohen, the president's personal lawyer for more than a decade, has reached a plea deal with U.S. attorneys. Two of the eight counts, on campaign finance fraud, relate directly to the president.

Deputy U.S. Attorney Robert Khuzami said, "What he did was he worked to pay money to silence two women who had information that he believed would be detrimental to the 2016 campaign and to the candidate and the campaign."

Cohen told a judge in court Tuesday afternoon he coordinated those payments in 2017 with a candidate for federal office. That candidate, not named in court, was Donald Trump. Cohen also said he was reimbursed.

We spoke with political science professor Keith Whittington on Monday ahead of these developments. Cohen directly implicated the president with his own guilty plea, but we don't know whether or not Cohen cooperated specifically.

"If I were the president, I wouldn't be confident in that Cohen would be willing to go to jail before dealing information that may be harmful to the president," Whittington said.

Senate intelligence committee Chairman Richard Burr and Vice Chairman Mark Warner said they've been working with Cohen, meaning the president may not be out of the woods.

"We recently re-engaged Mr. Cohen and his team following press reports that suggested he had advance knowledge of a June 16 meeting between campaign officials and Russian ... and a Russian lawyer at the Trump Tower," Burr said. "We hope that today's developments and Mr. Cohen's plea agreement will not preclude him from an appearance before our committee as needed for an ongoing investigation."

The other six counts deal with tax fraud and misrepresentation liabilities for a loan. Cohen is facing between three and a half and six years in prison. Sentencing is scheduled for Dec. 12.