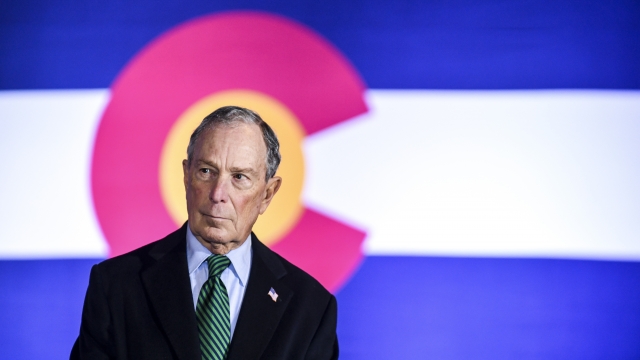 Michael Bloomberg: "I didn't accept gun violence ripping apart our cities and communities every day, and I'm going to do everything I can to change the administration in Washington and fight back against this evil."

The former mayor of New York City made the announcement at a venue in Aurora, Colorado, near the site of a 2012 mass shooting that left 12 people dead and 70 injured.

Bloomberg's detailed gun safety policy platform looks a lot like the ones from other Democratic presidential candidates: He's calling for more comprehensive background checks, a ban on so-called assault weapons and a ban on high-capacity magazines, to name a few goals.

Bloomberg's plan also includes about $300 million to fund anti-violence efforts. That'll be divided between the ATF, public health research into gun violence and local violence intervention programs that address the everyday gun violence in communities around the country.

Bloomberg: "A lot of politicians view this as a black and Latino problem, and so they just look the other way. … Black men only make up 6% of the population, but they make up 52% of gun violence victims."

Bloomberg has a history with gun safety activism. He co-founded Mayors Against Illegal Guns in 2006, which now includes a bipartisan coalition of more than 1,000 current and former mayors.

In 2014, Mayors Against Illegal Guns and Moms Demand Action combined to form Everytown for Gun Safety, a $50 million effort to combat the National Rifle Association's influence. Everytown also gave $1 million to March For Our Lives after its initial demonstration in 2018.

Bloomberg said his plan is something he'll work toward even if he doesn't earn the party's nomination.

Bloomberg: "My agenda is not some Johnny-come-lately list of borrowed ideas. This is part of my life's work, and I'm just telling you I will get this done whether I get elected or not."

Editor's note: This story has been updated to correct the day that Michael Bloomberg released his gun safety policy platform.