'MIB: International' Opens With The Worst U.S. Debut Of The Franchise 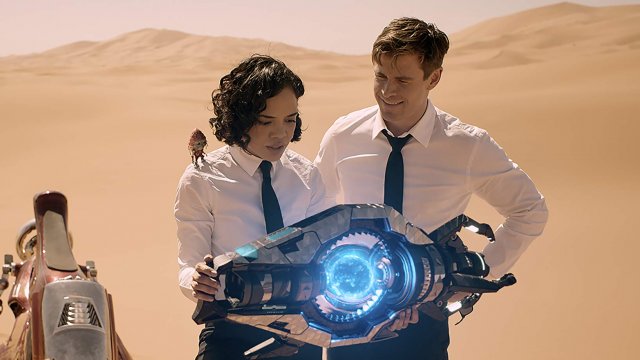 Falling below box office expectations but taking the No. 1 spot anyway is "Men in Black International" bringing in an estimated $28.5 million in its first weekend out. That is far and away the worst debut of the 'Men in Black' franchise.

Back in 1997 when the original MIB made its silver screen debut the film brought in more than $50 million opening weekend.  Years later, 'Men in Black 2' and 3 improved on that number in their subsequent debuts.

While the Men in Black franchise is a popular one and no one denies the on-screen chemistry between Tessa Thompson and Chris Hemsworth this film still struggled with critics. "Men in Black: International" sits at a disappointing 24% on the tomatometer.

Which isn't going to help in the coming weeks when the galaxy defenders face off against yet another critically-acclaimed "Toy Story" film.

Falling into second place this week is "The Secret Life of Pets 2" bringing in an estimated $23.8 million in its sophomore weekend and pushing its worldwide box office haul past $154 million.

And last but not least this week showing some incredible staying power at the domestic box office is Disney's "Aladdin" bringing in an estimated $16.7 million in its fourth weekend out.

Aside from "Endgame", "Aladdin" has been the biggest hit of the summer. After being in theaters for less than a month the Disney remake has sold nearly $725 million worth of movie tickets.

Which just goes to show you the real secret to box office success is a Will Smith led soundtrack.

As for next week, Key and Peele take on the roles they were born to play.