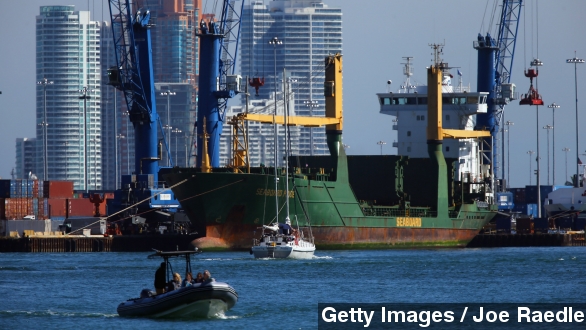 The port of Miami is expanding, and it's doing so in a way that could cause lasting damage.

That's because the dredging — underwater digging to deepen the port — is kicking up a lot of sediment, and that's causing problems for nearby coral reefs. (Video via Coral Morphologic)

The sediment has been blanketing the reefs and suffocating them, which is something the Army Corps of Engineers, in charge of overseeing the dredging, said wouldn't happen. (Video via CBS)

The dredging company relocated a lot of the corals from the reef before it started the dredging, but investigators from Florida's Department of Environmental Protection found they weren't moved far enough.

That led activists to sue the corps, which settled in October and agreed to pay $400,000 to relocate critically endangered staghorn corals, which had developed in the area. (Video via Fish and Wildlife Research Institute)

Biscayne Bay Waterkeeper Rachel Silverstein told National Geographic, "Where we're seeing corals declining around the world, these corals seem to be rebounding and they're doing okay here. They could be the seed population for repopulating Caribbean reefs."

The port is expanding to accommodate bigger container ships, to capitalize on increased traffic the Panama Canal's expansion could provide. (Video via Panama Canal)

"By 2014, the Port of Miami needs to be at 50 feet, and what 50 feet represents is billions of new dollars of increased trade and tens of thousands of new jobs for South Florida," Port of Miami director Bill Johnson told the Miami Herald.

But activists have questioned arguments that the expansion would bring more business.

"We're the number one expensive port in the country; we're at the very end of a peninsula, right down here at the tip of Florida. Why would those ships come here when, steam one day more, they could be in Jacksonville or Savannah or Norfolk," activist Dan Kipnis said.