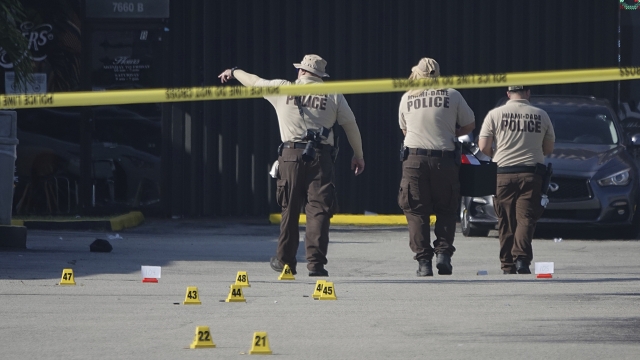 SMS
Miami Police Offering $130,000 Reward For Information In Mass Shooting
By Robin Dich
By Robin Dich
June 1, 2021
There were a number of separate shootings in Miami over the holiday weekend.
SHOW TRANSCRIPT

Miami police are still searching for suspects in the mass shooting over the weekend that left two people dead and at least 20 people hurt.

The department is now offering a $130,000 dollar reward for information.

Police released a surveillance video from the shooting yesterday. Three men are seen wearing masks and appear to be holding guns while getting out of an SUV. The suspects then started shooting at a crowd standing outside an event.

City officials say they are getting some leads.

"You know this video was so critical and people are calling. There are tips coming in. People are able to perhaps identify some of the shooters, other information," said Miami-Dade County Mayor Daniella Levine Cava. "So we're very hopeful that we can place the shooters very, very soon."

There were a number of separate shootings in Miami over the holiday weekend. The mayor of Miami-Dade County condemned the acts and said the city will work harder to prevent gun violence.